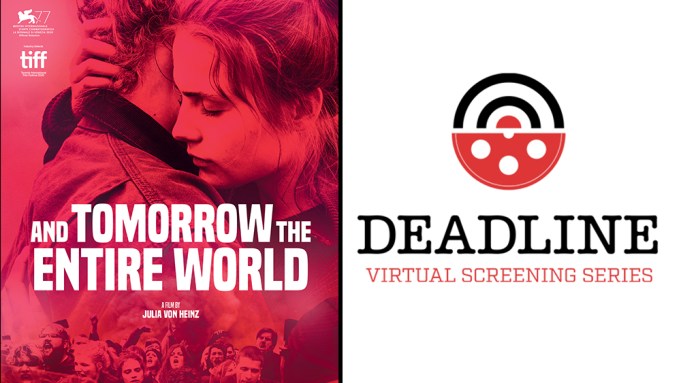 Back in the ’90s, writer and director Julia von Heinz was part of an anti-fascist group in her home country of Germany. And originally, that is the era in which she and her co-writer husband John Quester intended to re-tell that story on film. However, in recent years, the re-emergence of fascism prompted her to set the scene in the present day. Thus, her film, And Tomorrow the Entire World—Germany’s official submission to the Academy awards—was born.

“It was a very intense and very important time of my life,” Von Heinz said during a panel discussion at a virtual AwardsLine Screening Series presentation. “It was about one decade and I always wanted to make a film about it. At times I thought to make it historical, but some years ago the situation really changed, and we noticed that it’s a film that has to be in the present, so we took all that experience and all the emotions and put it in a new story…We all noticed since about 2015 that things have changed here and we have to do something.”

The film follows Luisa (Mala Emde), a student from a privileged background, whose political leanings lead her to join a small Antifa group, along with her best friend Batte (Luisa-Céline Gaffron). Along the way, tensions arise when Luisa is attracted to Alfa (Noah Saavedra), who believes in being violent to further the cause, while Batte does not.

But Von Heinz was anxious that the story not just be about Luisa being influenced by a man.

“I wanted to show three or four very important people who she follows and that influence Luisa and not only the guy… perhaps an earlier draft was the girl following the guy. And that’s where I needed that younger generation [to help]. I loved the dialogue with them.”

Emde learned a lot from Von Heinz, she said. “Julia showed me so much and she brought so much into this movie with her entire soul. This was so beautiful.” And she said young people need this kind of inspiration and support going forward. “My generation all feel this huge need to own our world, to change things. I can see it America, I can see it in France. I feel so encouraged by all these people and what is happening.”

The film feels particularly important at a time in which President Trump tweeted that Antifa were a terrorist group.

“I cannot stand still and watch people calling anti-facists a terrorist group,” Emde said. “As long as this is happening I’m happy to show this [isn’t true] with art.”

Von Heinz added, “I didn’t want to make a film that said, ‘It’s all behind me, and now I’ll show you,’ but to say, ‘We are still in the middle of the same fight in Germany. Again.'”