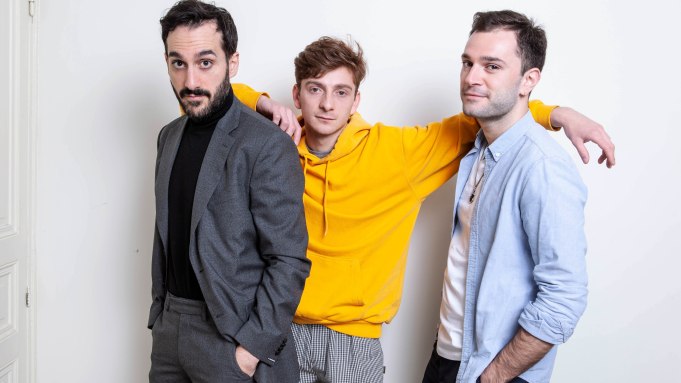 Levan Akin, a Swedish-born filmmaker of Georgian descent, is in Cannes with his third film, And Then We Danced, about a young man’s sexual awakening. The Directors’ Fortnight title’s subject matter required the team to be scrappy while shooting in Tbilisi, he explained during a visit to Deadline’s Cannes Studio.

The cast and crew had bodyguards, says Akin in the video above, adding, “We couldn’t be open about what the movie was about; we had to make up stories. It is legal to be gay in Georgia and there is protection on an official level. But as soon as we wanted to use locations and they would somehow hear what the movie is about, then the day before they were like, ‘No you can’t film here.’ So we were like this ragtag group of people running around, it was pretty tough in that sense.”

In the film, teacher Aliko (Kakha Gogidze) says, “There is no sexuality in Georgian dance.” That doesn’t sit well with Merab (Levan Gelbakhiani) who has been training since a young age at the National Georgian Ensemble. His world is suddenly turned upside down when the charismatic and carefree Irakli (Bachi Valishvili) arrives and becomes both his strongest rival and desire. In this conservative setting Merab finds himself having to break free and risk it all.

Akin previously made 2015’s The Circle which premiered in Berlin, and 2011’s Certain People. And Then We Danced is his first Georgian-language film. In the video above, the writer/director explains he was inspired by seeing images of Georgia’s first pride parade in 2013 which was “attacked by a counter parade organized by the Georgian orthodox church and some far rightwing groups. Those images were really terrible.”

For Valishvili, the response to the film’s subject matter has been both positive and negative, but there is movement on the plus side. Overall, he says, there is a switch “to a more warm and positive dialogue-style conversation.”

Akin concurs: “There is a vocal young progressive group trying to move this issue forward.”