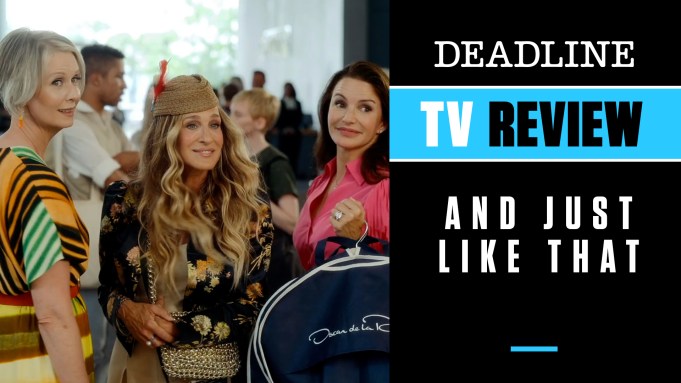 “We can’t just stay who we were,” says Cynthia Nixon’s Miranda Hobbes in the opening episode of The Sex and the City sequel series And Just Like That…

As true as the insight may be, it is also something that clearly runs counter to the desires of many fans of the HBO series that ended in 2004 and was followed by two financially successful feature films.

Good news for hardcore fans, And Just Like That sees Nixon’s Miranda, Sarah Jessica Parker’s Carrie Bradshaw, Kristin Davis’ Charlotte York and many of the gang from the Darren Starr created SATC almost unchanged in the post-pandemic 10-episode HBO Max series, which debuted its first two episodes today – as you can see in my video review above.

As well, Sara Ramirez, Nicole Ari Parker, Karen Pittman, and Sarita Choudhury are now part of the main cast of And Just Like That.

Bad News for Sex and the City fans,  there’s really no Samantha Jones (Kim Cattrall) in And Just Like That…, at least not this first season.  Even more lamentable, far too many 2021 cultural touchstones and new characters are awkwardly parachuted into the luscious looking Michael Patrick King executive produced revival of sorts, as if to check a box. Additionally, far too many of the original characters (now in the dusk of middle age) in the show based on Candace Bushnell’s writing are pretty much unchanged from who they were all those years ago – which is true and problematic.

Amidst the true red carpet of the NYC premiere yesterday, the first season of AJLT… runs until early 2022. Again, check out my video review of And Just Like That… above & tell us if you think Carrie and the ladies came back too soon.