Continue to Deadline SKIP AD
You will be redirected back to your article in seconds
Skip to main content
August 3, 2020 12:54pm
7Comments 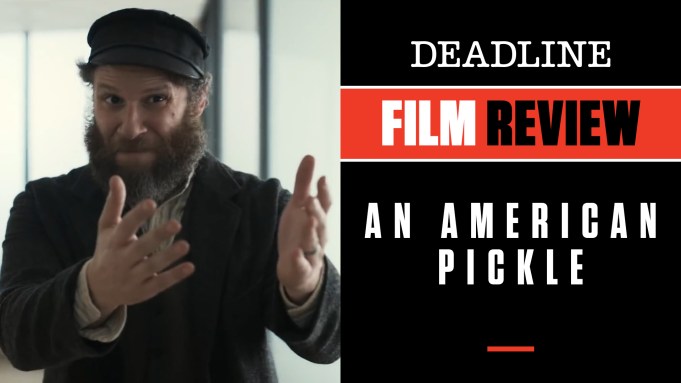 Fish-out-of-water stories are usually a surefire thing for successful comedies, and in the case of An American Pickle, we have an extreme fish-out-of-water tale. Seth Rogen, in one of his most appealing — and cleanest — roles, takes on the task of starring opposite himself in this amusing, even at times poignant, movie in which he plays a man and his great-grandson, separated by 100 years but now the same age.

So here’s the deal. When the film opens, we meet Herschel Greenbaum (Rogen), a ditch digger in 1919, living in a small Eastern European village and hoping to marry Sarah (Succession’s Sarah Snook). Right after they say their vows, the town is destroyed and they find themselves at Ellis Island with the dream realized of coming to America as Jewish immigrants and starting a new life. However, a horrible accident occurs one day at the factory job Herschel got, and he falls into a vat of pickles, becomes sealed and never to be found when the factory closes.

Cut to exactly 100 years later, when some kids see their drone crash through the place and rip off the top of the vat where Herschel is perfectly preserved after being brined for a century. He awakens to find he is now in modern Brooklyn and instantly goes in search of his loved ones, only to discover the only remaining direct connection is his great-grandson Ben (also played by Rogen), who is a computer coder out to create his ideal app. Once he meets Herschel, those plans go awry as Great-Grandpa’s Old World ways and attitudes collide with Ben’s life and aspirations.

Things really go haywire when Herschel, trying to come up with his own business selling his secret pickles on the street, becomes an instant media sensation in his otherworldly Tevye-like persona. Of course, things don’t always go so smooth with his newfound fame and his battles with Ben as these two generations of Greenbaums get to the boiling point.

Simon Rich has based his screenplay on his 2013 New Yorker novella Sell Out and expanded it to work cinematically with the great help of director Brandon Trost, who expertly guides the technical challenge of having two very different Seth Rogens work together as seamlessly as they do. To accomplish that task, Trost shot essentially two movies — first with Rogen playing Herschel and then all over again as plays Ben. The movie trickery, laid on with extensive CGI effects, is impressive, aided immeasurably by Rogen in top form on both accounts.

Rogen’s screen persona is well known at this point with his penchant for very R-rated language, but this represents his first lead role in PG-13 territory since the likes of Green Hornet and The Guilt Trip nearly a decade ago. It also represents a disciplined and quite affecting role for Rogen that ranks among his very best, certainly among his most entertaining and well-realized.

Sony Pictures originally had intended An American Pickle for theatrical release but, due to the pandemic, instead sold it to HBO Max, where it becomes the first big movie offering from the nascent service when it begins streaming on August 6. It marks an auspicious beginning and is sure to be a crowd-pleaser. Producers are Rogen, Evan Goldberg and James Weaver. Check out my video review with scenes from the film at the link above.

Do you plan to see An American Pickle? Let us know what you think.