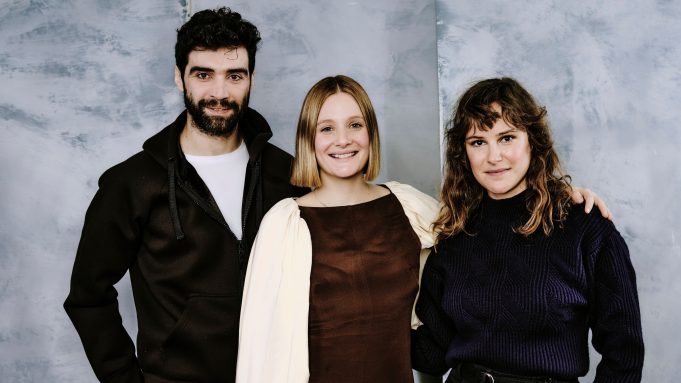 Amulet, which had its Sundance Film Festival premiere Jan. 26, centers on Tomaz, an ex-soldier now homeless in London, is offered a place to stay at a decaying house, inhabited by a young woman and her dying mother. As he starts to fall for Magda, Tomaz cannot ignore his suspicion that something insidious might also be living alongside them.

The film marks the feature directorial debut of English actress Romola Garai, who also wrote the piece, and is led by Carla Juri and Alec Secareanu. Before the film’s midnight screening, Garai, Juri, and Secareanu stopped by Deadline’s Sundance Studio.

“I’d always been a big fan of horrors. They’re some of my favorite films.”, said Garai, speaking on the impetus behind her film. “I think when I started out, because I’d never acted in a horror film and I work as an actor, I had maybe not considered it primarily so I’d been writing scripts that were largely dramas.”

She continued, “Then I was really inspired by the move by a lot of female filmmakers into the genre space… I really thought maybe this is where I should be going.”

“I wrote the script inspired in part by some research I’d been doing about the prosecution of some international criminal trials and what can happen in a civil war when somebody can feel like they’ve committed a crime in a war that they don’t have to pay the price for after the war is finished. So it’s about revenge and it’s about forgiveness really.”