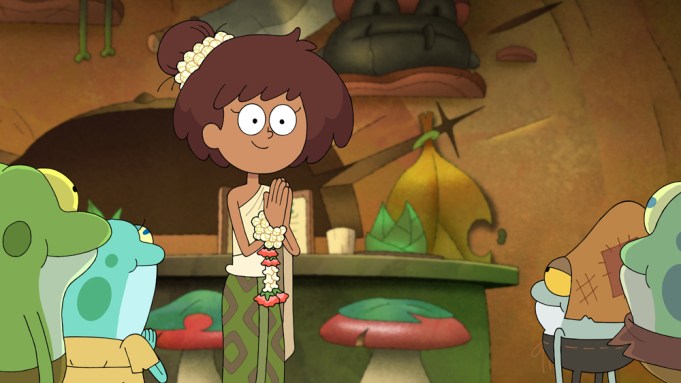 EXCLUSIVE: The Disney Channel’s forthcoming new animated comedy series Amphibia features the voice of Brenda Song and brings us to a “frog-out-of-water” world that is not only fun and fantastical but brings Thai culture to the forefront. In the new featurette for the series, creator and executive producer Annie Award-winner Matt Braly (Gravity Falls) talk about how Amphibia is inspired by his Thai heritage, family and childhood trips to Bangkok.

Debuting on June 17, Amphibia chronicles the adventures of independent and fearless teen Anne Boonchuy (Song, who is of Thai heritage) after she is magically transported to a rural marshland full of frog people and meets the excitable young frog Sprig Plantar and his family.

Starring alongside Song is Justin Felbinger (Disney Junior’s Miles From Tomorrowland) as Sprig Plantar, who forges a once-in-a-lifetime friendship with Anne; Amanda Leighton (This Is Us) as unpredictable pollywog (aka tadpole) Polly Plantar, the youngest member of the Plantar family; and Disney Legend Bill Farmer (the voice of Goofy) as overprotective and traditional grandfather Hop Pop.

In addition, the debut season of Amphibia will feature delightful roster of guest stars. Tony Hale (Veep) will lend his voice as mysterious salesman Apothecary Gary; Chris Sullivan ( another cast member from This Is Us) will step in as southern tusked frog Gunther, who lives on the outskirts of Wartwood, and bed and breakfast owner Teddy; Stephen Root (Barry) will play Wartwood’s Mayor Toadstool; Jack McBrayer (30 Rock) as Mayor Toadstool’s assistant, Toadie; and Kristen Johnston and Matt Jones (Mom) will appear as prison guards Braddock and Percy.

Amphibia will make its premiere on June 17 and air new episodes through June 20. Following the premiere week, the series will air daily throughout the summer. To bring you further into the fantastical world of Amphibia, there will be a series of shorts, under the title Teen Girl in a Frog World that will stream on Disney Channel YouTube in August as well as a DisneyNOW app that is an immersive role-playing game Amphibia: Locust Pocus that will coincide with the premiere.