Continue to Deadline SKIP AD
You will be redirected back to your article in seconds
Skip to main content
November 17, 2021 10:22am 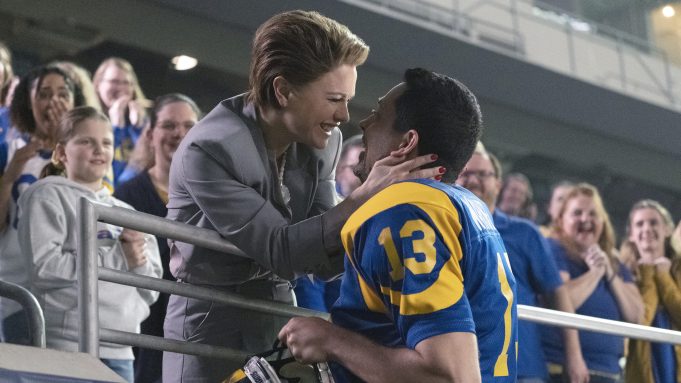 “Destiny belongs to the underdogs,” the coach tells his quarterback. “You want to prove that.”

Here’s the first full trailer for American Underdog: The Kurt Warner Story, starring Zachary Levi as the ultimate NFL long shot who became a champion quarterback and Hall of Famer. Check out the trailer above and the key art below.

As small-town product Warner dreams big about the NFL, his friends and family aren’t convinced that he’s spending his time wisely. While studying game film, the QB says, “I’m staying here — I’ve got work to do.” A pal replies: “Work? The NFL’s not gonna draft some dude from a 1-AA school in Iowa.”

That seems to be prudent advice as we see the undrafted Warner get rejected by “every team” in the league and is forced to take a job stocking shelves as the grocery store.

But a funny thing happened on the way to obscurity.

Warner’s wife, Brenda (Anna Paquin), tells him: “This is your dream — don’t give up on it.”

Enter the Arena Football League, which Warner enters on the advice of its founder (Bruce McGill). Much success later, he’s approached by reps for the Rams — the St. Louis Rams. We see the team’s brass being a mite skeptical during a meeting: “This guy’s old. He slow as molasses. He’s beneath the standards of this franchise.”

The 27-year-old rookie would go on to be the league’s two-time MVP and MVP of Super Bowl XXXIV en route to the Pro Football Hall of Fame.

Producers The Erwin Brothers — Andrew and Jon — directed American Underdog from a script the latter co-wrote with David Aaron Cohen and Jon Gunn. Kevin Downes, Mark Ciardi and Daryl Lefever also produced the film, which is based on Warner’s memoir All Things Possible. Lionsgate opens the pic in theaters Christmas Day.