Continue to Deadline SKIP AD
You will be redirected back to your article in seconds
Skip to main content
December 22, 2021 3:49pm 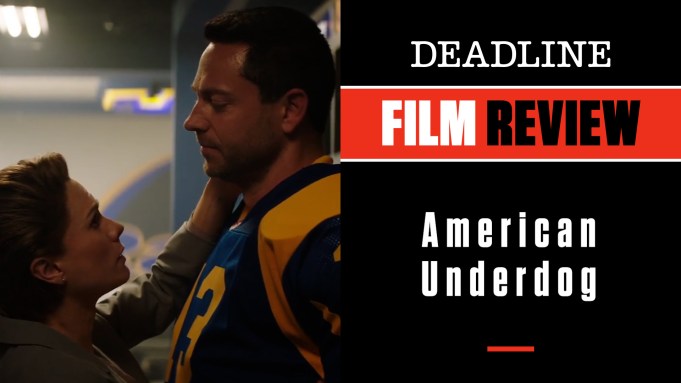 NFL legend Kurt Warner’s own unlikely path to the pinnacle of the sport is certainly the stuff of movies, and the only surprise is that no one has bothered to have done one until now with American Underdog, a title that pretty much says it all and sets up exactly what this is all about. It is also the stuff that fits nicely into the faith-based genre as Warner himself has often attributed his success to God whenever he has the chance. Add in the relationship with his wife Brenda, who had her own set of tragedies before and during their marriage, and the Warners’ tale makes for the kind of crowd-pleasing biopic that regularly used to be churned out by Hollywood.

Mix in filmmakers the Erwin Brothers, whose films include the breakout faith-based smash I Can Only Imagine, and you have the perfect storm of material that could find great appeal, particularly in the middle of the country this holiday season.

Directed by Jon and Andy Erwin and co-written by Jon Erwin with David Aaron Cohen and Jon Gunn, the story of Warner (played by Zachary Levi) is told in fairly linear fashion recounting his early dreams as a kid, success in high school and at the University of Northern Iowa where he was convinced he was on the path to becoming a big-time NFL quarterback.

Unfortunately, Warner was not chosen in the draft and that was a big bummer in his life. The film then also charts his personal life and meeting Brenda (Oscar winner Anna Paquin), a divorced mother whose young son Zack was severely injured when her then-husband accidently dropped him on his head at 4 months old; the child went blind as a result. In one of the film’s best scenes, Warner shows up at Brenda’s house the day after meeting her at a local bar (he got the address from a friend) and is actually welcomed inside by Zack. Seeing Warner bonding on his own with the boy is, as they say, the beginning of a beautiful friendship, and a romance with Brenda that leads to marriage.

Further tragedy hits Brenda though when both her parents are killed during a tornado that destroyed their house, but perseverance continues for both Brenda and Kurt, who at one point resorts to working as a grocery store clerk even as he tries to keep his dashed gridiron dreams alive; at one point he landed with the Green Bay Packers before quickly being cut.

An invitation to play in the much lesser indoor Arena League is one he keeps turning down until he no longer can. That decision becomes a wise one when he is spotted by legendary St. Louis Rams coach Dick Vermeil (a fine Dennis Quaid), and after an injury to starting quarterback Trent Green at the start of the 1999 season he famously stepped in and led the Rams to a Super Bowl victory and was named MVP. It is the quintessential rags-to-riches story in the world of sports, and one for which the term “inspirational” was coined.

The brothers don’t rewrite the rule book of sports biopics, but they service this story nicely in a way that could have a similar kind of impact as The Blind Side. The fact that it is verified as all true (it is based on Warner’s autobiography, All Things Possible, and the Warners are also executive producers) adds to its impact. Coming from filmmakers who specialize in faith-based stories, this is one that never lays that aspect on very thick, rather it is kept well within the realm of the tale they are telling, never resorting to any kind of preaching tone that to which so many of the lesser films in the genre fall prey.

Levi (Shazam!, Chuck) is ideal casting here, modest and determined and quite likable. Paquin is even better and really appears to capture the essence of the real Brenda in an emotionally satisfying and impressive turn. Bruce McGill has a few nice moments as well as the Arena League honcho who recruits Warner, while newcomer Hayden Zaller steals hearts and scenes as young Zack (the actor is blind in real life).

Check out my video review above with scenes from the film. Do you plan to see American Underdog? Let us know what you  think.