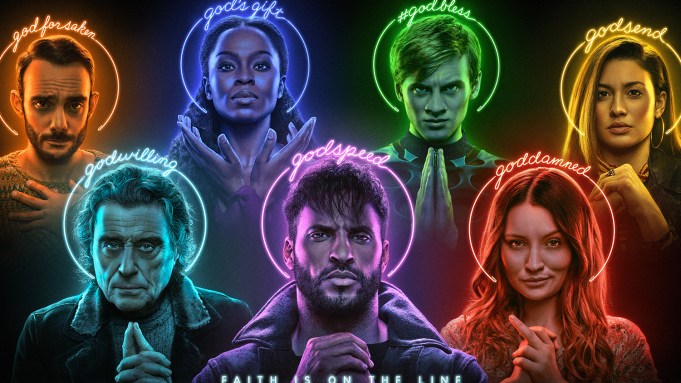 “We will hunt and kill everyone of you that gets in our way,” declares Crispin Glover’s Mr. World in the new trailer for American Gods‘ third season and then things really go off the road, literally.

With sex, blood and rock’n’roll and fueled by Superhuman’s cover of “My Way,” the extended look at the Ricky Whittle and Ian McShane-led series , based on EP Neil Gaiman’s award-winning 2001 novel, certainly raises the stakes in the divine war – as you can see in the video above.

Mainly set in and around the chilly and mystical Badger State town of Lakeside, this season of American Gods sees Lela Loren, Devery Jacobs, Blythe Danner, Marilyn Manson, Julia Sweeney, Danny Trejo and and Game Of Thrones alum Iwan Rheon on board for the battle between the Old Gods led by Odin (McShane) and the New Gods of digital media and more. As well the road trip of sorts sees Emily Browning, Omid Abtahi, Yetide Badaki, and Bruce Langley back with Glover, Whittle’s Shadow Moon and McShane’s Odin by any other name.

As McShane’s Mr. Wednesday says in the trailer: “Game on!”