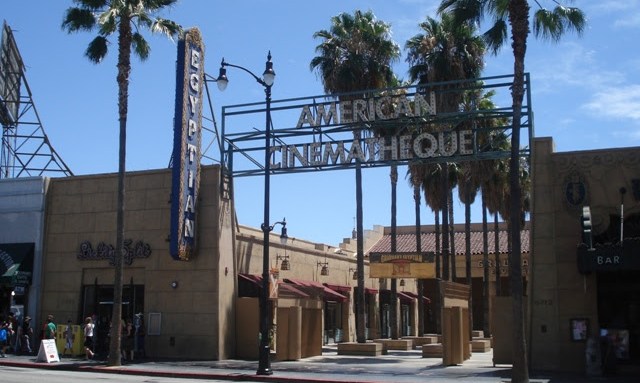 Following Alamo Drafthouse with its virtual cinema offerings (including today’s announcement of the online offering of the 1981 cult film Roar, which they are billing as the “original Tiger King”) and AFI with its innovative daily Movie Club with introductions of various film classics from the likes of Steven Spielberg, Brad Pitt and Robert De Niro, now it is American Cinematheque’s turn to jump into a new way of doing things.

The nonprofit dedicated to promoting the history and culture of movies, and which operates the venerable Egyptian Theatre in Hollywood and Aero Theatre in Santa Monica, is another organization forced to come up with innovative ways of keeping going during the coronavirus crisis, especially since their main business involves operating two movie theaters that had to cease operations last month due to citywide closures of all cinemas. Currently awaiting final approvals for the sale of the Egyptian to Netflix (they still will be able to program their usual menu of films and events on weekends even when the deal closes), the Cinematheque is doing what it has always done, only now they are taking it online.

Today it is offering the digital debut of the extremely rare short The Little Story of Gwen From French Brittany, from legendary Oscar-winning filmmaker Agnès Varda. In fact, you can see the movie right here by clicking the video above.

Gwen is Gwen Deglise, the Head Programmer for American Cinematheque, a job she got with a little boost from Varda herself. “In 2007, the French filmmaker and my dear friend Agnès Varda called me before coming to L.A. with a question: Would I agree to let her film my L.A story?” Deglise says about the video, which covers their first encounter in Paris in 1996 and the years afterward, including at the Cinematheque where Varda appeared many times when she was in town.

“’Our lives often crossed paths’,” as Agnès would again say a week before she passed away last year,” Deglise wrote in an open letter to members of the Cinematheque. “Today, now as Head Programmer of the organization, I think back fondly on all the memories with Agnès including her encouragement 26 years ago to move to L.A. and to seek out the American Cinematheque. I cherish the long evenings spent together planning her events at the AC, as well as the wisdom she offered at many of life’s important moments. Of her many gifts: her curiosity was limitless, her appetite for life boundless. The endless inventiveness of her art shines through in her films and was inspiring to witness, and a privilege to be close to,” added Deglise, herself a recent recipient of Chevalier (Knight) of the Order of Arts and Letters.

The organization is using email blasts to keep members up to date on all that is still happening in these shelter-at-home times. “As you can see from our e-blasts that we have been able to apply our same philosophy of programming that has been so successful for the past 20 years at the Egyptian and Aero by bringing it online using all our social media channels,” said Grant Moninger, another veteran programmer of the org. “As you know from your own experiences at the AC we are featuring special looks inside cinema, celebrating our history, saluting our staff, members and volunteers and highlighting the rich film history documented through our countless hours of Q&A’s never seen before.”

Moninger also notes they are thrilled that the Hollywood Foreign Press Association, which annually offers grants to the AC including $500,000 for theatre renovations in 2016, has just made a grant in support of the long process of digitizing AC’s 35-year-old archive, which includes thousands of live discussions (including some I moderated) with filmmaking luminaries.

“This is a big deal because our archive is so extensive and we have never had the resources to bring this content to our members and audience in the viable format for social media,” he said. “So, while we wait to be able to once again program for audiences in our theatres, we are enjoying the dialogue we are having on social media with movie lovers everywhere.”

Check out The Little Story of Gwen From French Brittany above.