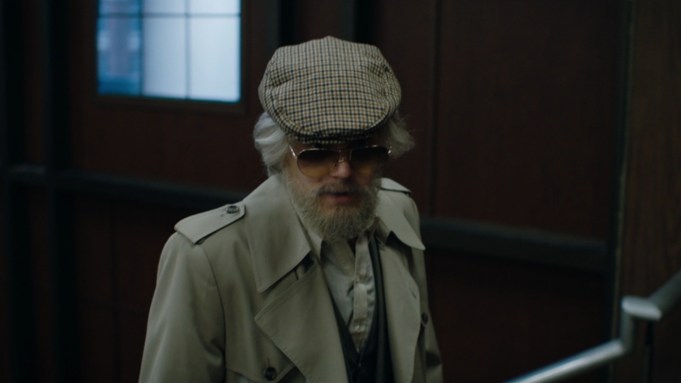 At the beginning of the compelling and brilliant new heist drama American Animals, a title card says “This Is Based On A True Story,” only to see the words “Based On” erased quickly to read simply “This Is A True Story.” And that is an understatement. Although this film is about a real 2004 rare-books heist pulled off by four young men in the library of Kentucky’s Transylvania University, it is unlike any heist movie I have ever seen as it seamlessly weaves in interviews with the main principals who were involved, integrated into scenes with the actors playing them. Make no mistake, this is not a documentary, but in the clever hands of writer-director Bart Layton it has the distinct feel of authenticity by letting the real guys share the roles of themselves with a sterling ensemble of actors. Most recently we saw real people re-creating their own story in Clint Eastwood’s The 15:17 to Paris, but as I say in my video review above this is an entirely different kind of animal altogether.

Barry Keoghan plays Spencer Rheinhard, a college art student who masterminds a heist of some rare and valuable 17th century books housed in the campus library’s Special Collections area. His exact reasons for doing this are murky, but he enlists a rather unhinged friend, Warren Lipka (an excellent Evan Peters), to help out, and then eventually two others, Chas (Blake Jenner) and Eric (Jared Abrahamson), even though some already come from wealthy families and don’t seem to need to pull of this kind of operation. But again, truth can be stranger than fiction, and as we are constantly reminded throughout this two-hour movie it all really happened in just this way.

Layton is in fact making his narrative feature debut here after previously working in documentaries; the attention to detail and authentication shows in every frame. Much of the film follows typical heist movies in meticulously showing the planning and proposed execution of the plan, which for some reason these four guys (in way over their head as we soon see) think they can pull off without a hitch by tying up the librarian named Betty Jean Gooch (the always terrific Ann Dowd) and making off with the books — which include the extremely rare Birds of America, which Lipka says he had already arranged to be bought for likely millions by a fence (Udo Keir) in Amsterdam. Among their preparation routine is watching every heist movie they can get their hands on  including Ocean’s 11 , and particularly Stanley Kubrick’s undersung 1955 race-track heist classic The Killing. Any movie that pays homage to that great film knows exactly what it is doing, at least if you ask me.

Suffice to say the heist itself, incredibly suspenseful and almost operatic, does not go as smoothly as planned. The rest is history, but it is best not to know too much about it going in. Layton, his cast of actors and his cast of the real people involved (including the real Gooch) know exactly how to tell this fascinating, complex and quirky crime tale, but the ultimate message is up to interpretation. Like every facet of this beautifully made suspense drama, Layton is not playing by the rule book. This is a true and extraordinary American original and in a summer of sequels, reboots and retreads comes not a minute too soon as a welcome breath of fresh air on the movie scene.

Katherine Butler, Poppy Dixon, Dimitri Doganis, Derrin Schlesinger and Mary Jane Skalski are the producers, and intriguingly Movie Pass Ventures is listed as one of the production entities. After premiering this year at Sundance, The Orchard opens it Friday.

Do you plan to see American Animals? Let us know what you think.