Continue to Deadline SKIP AD
You will be redirected back to your article in seconds
Skip to main content
April 7, 2021 1:50pm 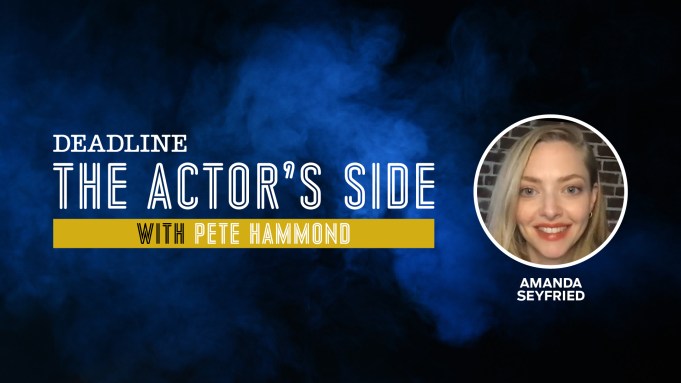 As I began my conversation with Best Supporting Actress Academy Award nominee Amanda Seyfried for this week’s edition of my Deadline video series The Actor’s Side, she was a bit taken aback and told me this was the first time anyone had ever introduced her as an Oscar-nominated actress. But that is indeed what she is — for the first time — for her role playing another notable actress of the 1920s and ’30s, Marion Davies, in David Fincher’s ode to the golden age of Hollywood and more specifically the creation of Citizen Kane in Mank. The film is up for 10 Oscars, including Seyfried and lead actor Gary Oldman, who plays the screenwriter Herman Mankiewicz around whom the story is centered.

As Seyfried tells me, this isn’t actually the first time she has played another performer. In 2013 she took on the title role in Lovelace, bringing the life of adult movie star Linda Lovelace to the screen. Although wildly different than the experience of playing Davies, she does admit there were some things in common between them that she could mine in finding the humanity in each, an important point she notes in playing real-life characters. She talks also about how Davies was particularly accomplished in comedy but never really given the credit — she never once was honored by the Hollywood establishment in terms of awards — and how this Oscar nomination in its own way celebrates an underrated star of Hollywood’s past.

Our interview covers a wide range of Seyfried’s ever-busy career beginning with a breakout role in her very first film, the iconic teen comedy Mean Girls. “I started big which was a stroke of luck,” she laughs. She even talks about her first awards-show experience at 18, when she won at the MTV Movie Awards (the only awards show she really watched at that point, she admits). She also talks about her “survival technique” of working in all genres of movies, including smash hit musicals like Les Miserables for which she was flatly turned down for the role of Cosette until after her sixth audition, and both Mamma Mia! films. Will there be a third? She gives us an answer to that burning question as well as her reaction when she learned Cher would be playing her grandmother.

There is much, much more to our conversation, so to watch Amanda Seyfried tell us her view of The Actor’s Side, click on the video above.