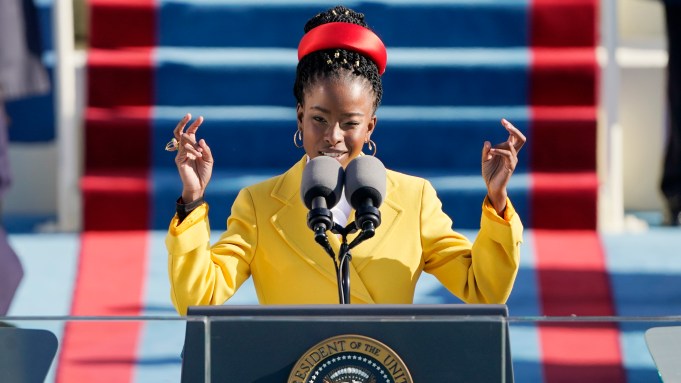 In the wake of delivering her breathtaking, emotional poem “The Hill We Climb” at the inauguration of President Joe Biden, 22-year-old poet Amanda Gorman is seeing not only an explosion in her social media following, but her two books — Change Sings and The Hill We Climb — already hold the No. 1 and No. 2 spots on Amazon’s bestseller list. And the books don’t hit shelves until September.

Gorman’s upcoming books even out-pegged A Promised Land by President Barack Obama (currently in the No. 5 spot), who also became an instant fan of the young Angeleno’s words today. She is the youngest inaugural poet in U.S. history.

I AM ON THE FLOOR MY BOOKS ARE #1 & #2 ON AMAZON AFTER 1 DAY! Thank you so much to everyone for supporting me and my words. As Yeats put it: "For words alone are certain good: Sing, then"

Gorman’s Change Sings: A Children’s Anthem follows a young girl who leads a cast of characters on a musical journey. They learn that they have the power to make changes — big or small — in the world, in their communities and, most importantly, in themselves. The booked is billed as “a triumphant call to action for everyone to use their abilities to make a difference.”

The Hill We Climb is Gorman’s debut collection of poetry.

While the dais at the U.S. Capitol was jam-packed with stars like Lady Gaga, Jennifer Lopez and Garth Brooks performing and former U.S. Commanders-in-Chief Bill Clinton and George W. Bush joining Obama in attendance, Gorman stole the spotlight with a poem so electric that its spirituality soothed the deep wounds of those burned by the 45th president, Donald Trump, whose inflammatory rhetoric only spurred division.

Gorman follows in the footsteps of such inaugural poets as Robert Frost, Maya Angelou, Miller Williams, Elizabeth Alexander and Richard Blanco. The poet, who described her background as a “skinny Black girl, descended from slaves and raised by a single mother” who can dream of being president one day, “only to find herself reciting for one,” delivered an anthem of hope, especially at a time when America has suffered from a hundred-year pandemic, political violence and division.

“We’ve learned that quiet isn’t always peace and the norms and notions of what just is, isn’t always justice. And yet the dawn is hours before we knew it, somehow we do it, somehow we’ve weathered and witnessed a nation that isn’t broken but simply unfinished”, exclaimed Gorman today, “So, while once we asked, ‘how could we possibly prevail over catastrophe?’, now we assert, ‘how could catastrophe possibly prevail over us?’ We will not march back to what was, but move to what shall be, a country that is bruised but whole, benevolent but bold, fierce and free. We will not be turned around or interrupted by intimidation.”

“I have never been prouder to see another young woman rise! Brava Brava, @TheAmandaGorman! Maya Angelou is cheering—and so am I,” tweeted Oprah Winfrey who gifted the poet a caged bird ring to honor Angelou.

Gorman tweeted, “Thank you! I would be nowhere without the women whose footsteps I dance in. While reciting my poem, I wore a ring with a caged bird—a gift from @Oprah for the occasion , to symbolize Maya Angelou, a previous inaugural poet. Here’s to the women who have climbed my hills before.”

Gorman stood at the U.S. Capitol steps on which two weeks before pro-Trump rioters laid siege. It was on that same day, Jan. 6, that Gorman finished the poem. She told the New York Times in an interview yesterday that her words would not “gloss over what we’ve seen over the past few weeks and, dare I say, the past few years. But what I really aspire to do in the poem is to be able to use my words to envision a way in which our country can still come together and can still heal…It’s doing that in a way that is not erasing or neglecting the harsh truths I think America needs to reconcile with.”

Gorman’s poetry this AM sparked a fire that burned brightly on Twitter, in particular there were two references to the musical Hamilton with the line “history has its eyes on us” and “Scripture tells us to envision that everyone shall sit under their own vine and fig tree,” a line similar to a lyric from the musical’s song “One Last Time”. Creator Lin-Manuel Miranda definitely took note:

You were perfect. Perfectly written, perfectly delivered. Every bit of it. Brava! -LMM

But it wasn’t just Miranda who took notice, but the Obamas and Hillary Clinton:

With her strong and poignant words, @TheAmandaGorman reminds us of the power we each hold in upholding our democracy. Keep shining, Amanda! I can't wait to see what you do next. 💕 #BlackGirlMagic

Wasn't @TheAmandaGorman’s poem just stunning? She's promised to run for president in 2036 and I for one can't wait. pic.twitter.com/rahEClc6k2

Gorman was named the first-ever National Youth Poet Laureate of the United States in 2017.  Having appeared on CBS This Morning five times since 2018, she is repped by WME. Early on, she came up through WriteGirl, a Los Angeles-based nonprofit that helps teens discover their voices through creative writing. Her social media handles exploded today with her Twitter over 798M followers and her Instagram at 1.4M.

Mr. President, Dr. Biden, Madam Vice President, Mr. Emhoff, Americans and the world, when day comes, we ask ourselves where can we find light in this never ending shade? The loss we carry, a sea we must wade. We braved the belly of the beast.

We’ve learned that quiet isn’t always peace and the norms and notions of what just is, isn’t always justice. And yet the dawn is hours before we knew it, somehow we do it, somehow we’ve weathered and witnessed a nation that isn’t broken but simply unfinished.

We, the successors of a country and a time, where a skinny black girl descended from slaves and raised by a single mother can dream of becoming president, only to find herself reciting for one.

And yes, we are far from polished, far from pristine, but that doesn’t mean we are striving to form a union that is perfect. We are striving to forge our union with purpose, to compose a country committed to all cultures, colors, characters, and conditions of man. And so we lift our gazes not to what stands between us but what stands before us. We close the divide because we know to put our future first. We must first put our differences aside.

We lay down our arms so we can reach out our arms to one another We seek harm to none and harmony for all. Let the globe, if nothing else, say this is true, that even as we grieved, we grew. That even as we hurt, we hoped.

Scripture tells us to envision that everyone shall sit under their own vine and fig tree, and no one shall make them afraid.

If we’re to live up to our own time, then victory won’t lighten the blade but in all the bridges we’ve made, that is the promise to glade, the hill we climb if only we dare, it’s because being American is more than a pride we inherit. It’s the past we stepped into and how we repair it.

We’ve seen a force that would shatter our nation rather than share it, would destroy our country if it meant delaying democracy. And this effort very nearly succeeded. But while democracy can be periodically delayed, it can never be permanently defeated. In this truth, in this faith, we trust. For while we have our eyes on the future, history has its eyes on us.

This is the era of just redemption. We feared — at its deception. We did not feel prepared to be the heirs of such a terrifying hour, but within it we found the power to author a new chapter, to offer hope and laughter to ourselves.

Because we know our inaction and inertia will be the inheritance of the next generation. Our blunders become their burdens. But one thing is certain. If we merge mercy with might and might with right, then love becomes our legacy and change, our children’s birth right.

We will rise from the sun-baked South. We will rebuild, reconcile, and recover, in every known nook of our nation, in every corner called our country, our people diverse and beautiful, will emerge battered and beautiful.

When day comes, we step out of the shade, aflame and unafraid.