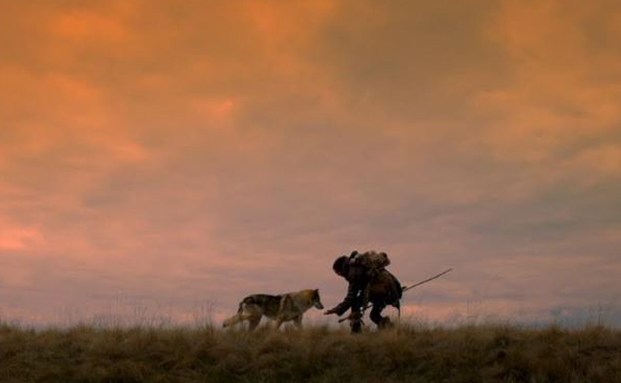 I probably have said it before, but I am a sucker for boy-and-his-dog movies ever since I saw Disney’s Old Yeller and in recent years the magnificent My Dog Skip. Nothing hits the emotional buttons more than this kind of film, and now — thanks to Sony and Jeff Robinov’s new production shingle Studio 8 — we have Alpha, which is a boy-and-his-wolf movie but really the same thing.

Beautifully filmed in Western Canada’s British Columbia and Alberta, among other locations, this is the kind of movie you might think would have come from Disney. Instead, surprisingly, it is the work of director Albert Hughes, who with his brother previously made movies like Menace II Society and From Hell. As I say in my video review (click the link above), those films could not be more opposite Alpha, which proves Hughes is some kind of fine motion picture craftsman on his own.

Working from a screenplay by Daniele Sebastian Wiedenhaupt, this is a spare story set 20,000 years ago in prehistoric times during the last Ice Age. It centers on Keda (Kodi Smit-McPhee), a young man who is joining his father Chief Tau’s (Johannes Haukur Johannesson, a dead ringer for a young Orson Welles) tribe to learn the harsh ways of the world and survival in primitive circumstances. His mom (Natassia Malthe) doesn’t approve but can’t stop him. The movie wastes no time in getting to the danger and action with a thrilling battle between the tribe and a herd of bison that is tricked into heading over a steep cliff straight to their gruesome deaths. At the end of the pack is at least one smart beast who figures it out, turns around and ensnares young Keda, taking him on a wild ride to the edge and tossing him over.

Flash back to one week earlier, and we learn his backstory. Soon the opening scene is reprised and we see where Keda lands, presumably dead on an impenetrable area of the imposing sheer cliff. Tau is devastated, a memorial of rocks is laid, and the tribe moves on. Eventually Keda comes back to life, however, and miraculously finds his way out, soon to encounter a pack of wolves led by the one he will call Alpha. When Alpha is injured, the pack abandons him, and Keda and Alpha soon find that they need each other to make it back home. Thus begins their tentative relationship, turning into a powerful alliance.

Hughes stages exciting scenes where Alpha goes for food, Lions attack, and the wolf must help his human friend out of a frozen lake where he is submerged helpless under the ice. With stunning cinematography from Martin Gschlacht and sharp editing from Sandra Ganovsky, Hughes has an ace team to make a truly great family film that richly deserves to find an audience in the dog days of summer. It opened to middling box office over the weekend (I caught up with it in a neighborhood theatre where the crowd was rapt) and hopefully will thrive on word of mouth.

Performances are excellent, particularly Smit-McPhee, but as is often the case in a boy and his dog movie, it is the dog that steals the show. So it is with Alpha, who is played by Chuck in what the credits say is his first film. Chuck’s soulful eyes tell it all, and hopefully he finds a lot of work based on this performance. Producer is Andrew Rona.

Do you plan to see Alpha? Let us know what you think.