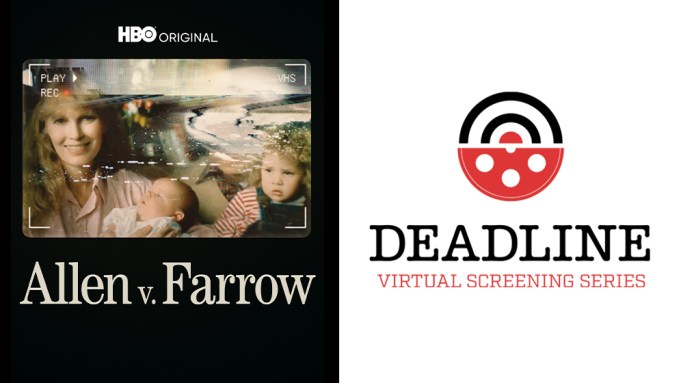 With Allen v. Farrow, filmmakers Kirby Dick and Amy Ziering looked to shed new light on a story most people thought they understood—one that had already been dissected in the media, for nearly three decades.

Their four-part HBO series digs into allegations of sexual abuse against filmmaker Woody Allen, involving his 7-year-old daughter Dylan Farrow, which were first made public in 1992. (Allen declined to participate in the series, and continues to deny all accusations against him.)

Allen v. Farrow was made in secret over the course of three years, with Dick and Ziering serving as co-creators, co-directors, executive producers, and co-writers. The project was launched with critical assistance from the Oscar nominees’ longtime collaborator, Amy Herdy, an award-winning investigative filmmaker and journalist, who served as co-creator and producer, arranging for Ziering to interview Dylan Farrow.

As Dick noted during a recent panel discussion, as part of Deadline’s Virtual Screening Series, this sit-down was “revelatory.”

The next step in the investigation for Herdy—who joined Dick, Ziering and composer Michael Abels on the panel—was to get access to, and dig through tens of thousands of pages of materials, including court documents, police reports, eyewitness testimonies, and child welfare records, at least some of which had previously been sealed.

This process involved “countless hours” of what she calls “eyeball-stabbing work.”

“The facts were so crucial here because this was a case that had been tried in the public eye for so long, and the public did not know all the details,” said Herdy. “So, we had to present to them the undisputed facts, and those were found in the court records and the police reports.”

While Dick and Ziering had previously collaborated with Herdy on a series of award-winning films, including The Invisible War (2012), The Hunting Ground (2015), The Bleeding Edge (2018), and On the Record (2020), the filmmakers knew around a year into her investigation that their latest effort would be a series.

This was because of the magnitude of the facts she had unearthed, which spoke not only to dynamics within the Farrow family, but also to more pervasive issues, including incest, grooming, and the fractured family court system.

“Amy…is always getting things that I think are impossible to get,” said Dick.

“She has investigative superpowers,” added Ziering.

“I think that’s one of the reasons the series is so revelatory, is people get a complete story that people had attempted to suppress for so long,” Dick continued, “and that’s a tribute to her persistence, her work, her brilliance.”

Later in the panel, Abels discussed “the enthusiasm” on the part of Dick and Ziering that led him to get involved in the series, as its composer. “They’re extremely committed filmmakers,” he said, “and so anything that they wanted me to take a look at, I was excited to look at.”

The composer also touched on his approach to scoring a project of such emotional weight, and crafting its main title theme.

Abels notched his first two Emmy nominations for his work on the series, in the categories of Outstanding Music Composition for a Documentary Series or Special (Original Dramatic Score) and Outstanding Original Main Title Theme Music.

Check out our entire conversation with the team behind the series above.