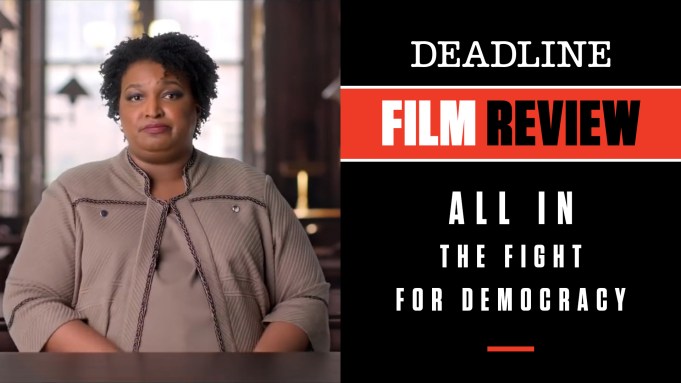 If all had gone according to plan, the new documentary about former Georgia gubernatorial candidate Stacey Abrams and her quest to end voter suppression in America would have had its world premiere at the Telluride Film Festival this weekend and Abrams would be traveling to the Colorado Rockies right about now to show it.

But the coronavirus pandemic changed those plans, and Telluride was forced to cancel its fest, yet it still put out the list of films originally selected, and this one was high in terms of anticipation. Now instead it will be premiering in theaters on September 9 and then on September 18 on Amazon, just four days before National Voter Registration Day. It ranks as one of the most important films you might see all year, an urgent cry to conquer voter suppression and allow Americans, all Americans, their entitled right to a vote. Timed for release to impact the November 3 election, this is a movie designed to go beyond just a viewing experience. It is a call to action by a politician and activist who walks the walk.

Abrams was the first Black female major-party nominee for governor when she ran in Georgia against Republican Brian Kemp in 2018, narrowly losing in a close election where, as the film points out, voter suppression and purging in largely African American counties might have greatly affected that outcome. On top of that, her opponent was Georgia’s Secretary of State, who was actually in charge of his own election, a mind-boggling situation that as one interviewee in the film points out is something you might expect from a banana republic but not America.

Determined not to give up, Abrams instead has taken on the cause of ensuring fair elections and the rights of voters of all ethnicities, and sought out potential filmmakers to tell the story in a way that can reach those most affected. She found them in Oscar- and Emmy-winning and -nominated directors Liz Garbus and Lisa Cortes, and what they have crafted is not just a movie focused on Abrams and her mission but on the whole scope of voting rights, their history and their current state which in many ways appears to be more dire than ever, especially as it concerns the Black, Latinx, Native American and other communities targeted by primarily GOP lawmakers determined to make it as difficult as possible to cast a ballot.

Todd McCarthy: The Screens Are Empty In Telluride

The filmmakers highlight the hard-won 1965 signing of the Voters Rights Act and consequentially its virtual gutting in 2013 by the 5-4 U.S. Supreme Court ruling in a landmark case called Shelby County v. Holder. That basically led to an undoing of the Voting Rights Act in many states, especially in the South, where strict voter ID requirements, purging of registration rolls and elimination of polling locations in poorer communities has run rampant. The film also compellingly shows the history behind all this from the Women’s Suffrage movement that finally gave women the right to vote 100 years ago to some shocking examples of threats against Black Americans by the Ku Klux Klan and variations of it. The latter includes a chilling tale of a lone African American who was the only member of his race to cast a vote in his country in 1946, ignoring naked threats should any Black person do it. Days later, he was shot down in cold blood by whites who knocked on his door.

The valiant marches and efforts to achieve the right to vote are shown in vivid detail as are current examples of taking it away, such as Texas’ voter ID laws that accept gun-owner IDs but not student IDs, for example. The Trump administration’s assault on mail-in ballots and manipulation of the Postal Service is just the latest example of trampling on the rights that every U.S. citizen over age 18 thought they already had.

Weaved in and out is the inspiring story of Abrams’ personal journey of discrimination and her increasing determination to make a difference as she fought opposition like Kemp, who seems like an institutional relic of the Jim Crow South and is a real villain in the story. As depressing as it seems, the film fortunately also sets an optimistic tone in showing current grassroots organizing to make sure every vote is cast and counted and presents at the end an upbeat list of things to do to ensure all of that. If movies can be used as a vehicle for real change, then Abrams might have found a calling even greater than being governor of Georgia or on the shortlist for being chosen as the Democratic nominee for vice president. This film is an important reminder that all is not lost — yet.

Producers are Abrams, Garbus, Cortes and Dan Cogan. Check out my video review with scenes from the film at the link above. And remember to vote.

Do you plan to see All In: The Fight for Democracy? Let us know what you think.