Continue to Deadline SKIP AD
You will be redirected back to your article in seconds
Skip to main content
August 17, 2020 2:09pm
10Comments 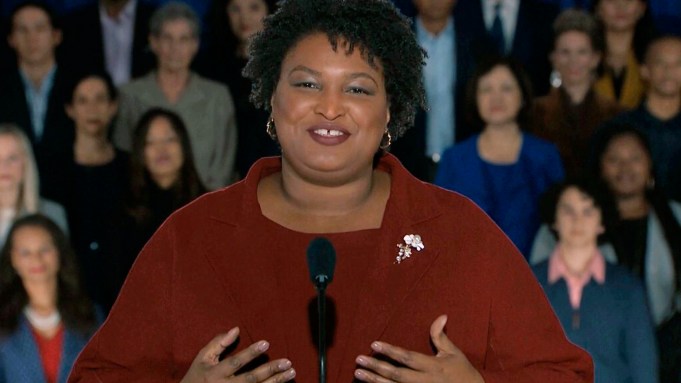 With the 2020 presidential election less than three months away, Amazon Studios revisits Georgia’s 2018 gubernatorial race with the trailer for its latest political doc All In: The Fight for Democracy.

The film from Oscar-nominated filmmakers Liz Garbus and Lisa Cortés takes a closer look at voter suppression in the United States, highlighting Stacey Abrams’ historic run against Brian Kemp for the Georgia Governor’s seat. Abrams, who is the first Black woman to become the gubernatorial nominee for a major party in the U.S., claimed that voter suppression measures cost her the 2018 election, which saw her fall behind Kemp by 50,000 votes.

“If the power of the right to vote was truly made available to everyone in America, it would change the future of this nation,” says Abrams, kicking off the film’s punchy trailer.

The doc features footage from Abrams’ various campaigns, anecdotes from Georgia voters who waited for hours to cast their ballots, analysis from political experts and commentary from historians who say that voter suppression, though harmful to democracy, is nothing new.

The trailer comes as conversations about universal vote-by-mail enters political discourse and as President Trump continues to limit financial support for the United States Postal Service, the national service responsible for distributing and collecting the mail-in ballots. All In: The Fight For Democracy takes the magnifying glass from the Georgia election and holds it towards the U.S. as a whole, examining how the same tactics manifest in various elections and affect different demographics all over the country.

“You belong, you have value,” Abrams tells the viewers.

All In: The Fight For Democracy hits select theaters on Sept. 9 and will head to Prime Video on Sept. 18. Garbus, Cortés, Abrams and Dan Cogan produce the political documentary.