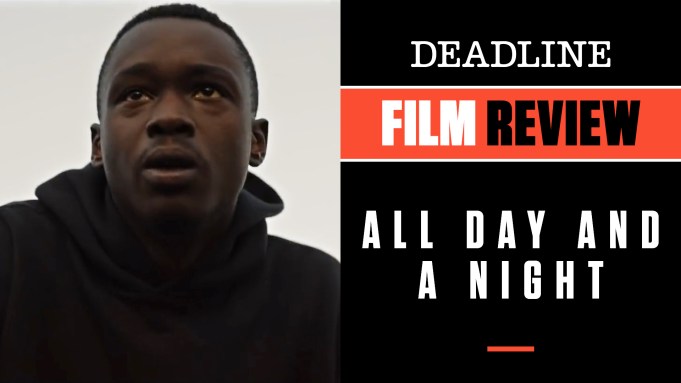 Considering similar territory covered in much better, stirring dramas such as Ryan Coogler’s Fruitvale Station, John Singleton’s seminal Boyz n the Hood and Joe Talbot’s transcendent The Last Black Man in San Francisco — one of my top 10 favorites of 2019 — to name just three, Coogler’s Black Panther co-writer Joe Robert Cole shows some promise with All Day and a Night. But the story he has cooked up is an overly familiar tale that struggles to find something fresh to say about life in the hood, to borrow Singleton’s title.

That would be Oakland, a city familiar to the nascent writer-director who made a big splash co-writing Black Panther, no doubt a strong calling card to entice Netflix — which begins streaming the film Friday — and its heavyweight Hollywood producers Nina Jacobson and Brad Simpson.

Part of the problem is Cole writes himself into corner almost immediately in the non-linear script, which has us meeting Jahkor (Moonlight’s Ashton Sanders) in the process of breaking into a house, lying in wait and then committing a double homicide in front of a young couple’s daughter. Horrifying stuff, followed by a ride to justice in several quick scenes that see him finally packed off to prison, his life in ruins as the film then darts back and forth between somber voice-over dialogue from Jahkor as he traverses prison life and reliving a couple of decades worth of flashbacks attempting to give some understanding as to what brought him to this tragic moment.

In his director’s statement, Cole says he wanted to create an exercise in empathy that is admittedly “tough by design” but connects with the humanity of its characters, an effort to humanize those caught up in the dead end of a dehumanizing community, voices not often heard. That is a tough assignment when we first meet a protagonist who is shown to be a certifiable dead-behind-the-eyes killer. But we learn he is an aspiring rapper who finds himself caught up in a viciously violent gang war, with things spiraling out of control almost right from the moment he is jacking cars with friends including the more ambitious TQ (Isaiah John) who wants to move on to the heavier crimes. There’s also gang leader Big Stunna (Yahya Abdul Mateen II) and another rapper, among others, who don’t prove to be the answer to Jahkor’s ticket out of this battlefield.

But the real problem, and main theme running throughout, is provided by his father J.D. (the always excellent Jeffrey Wright), who is a killer himself, as witnessed by the young Jahkor (played nicely by Jalyn Emil Hall) watching Dad commit a ruthless murder, and himself having been punished and admonished by the man for not being tougher in his own life. We soon see Cole’s main point is that the sins of the father carry over to the son, an endless cycle of violence that seems to be in the family genes. Interestingly, this is a similar theme running through the current Apple TV+ limited series, Defending Jacob.

As the timeline rolls all over the place, the deck is stacked against the kid. His new job as a shoe salesman goes nowhere as white customers apparently are repulsed by a young black man waiting on them. And earlier as a young boy basically tossed aside by the school system as his mother (Kelly Jennette) and more encouraging grandmother (Regina Taylor) get a bad report from his white teacher.

Through it all, Sanders’ older Jahkor does not exhibit a lot of personality, playing much of it in low-key passivity, with some exceptions like when his girlfriend (Shakira Ja’nai Paye) reveals she is pregnant. That relationship becomes complicated, to say the least, and events eventually lead to where it all began with the cold-blooded murder and one-way trip to prison, where he finds himself at the same endgame and in the same facility as his father. The real hope, if there is any by this point, is that his own fate in life, and that of his father’s, is not passed on to his newborn — a boy he never got to meet before being incarcerated.

The acting is very fine across the board, even as the script resorts to some clichés of the genre including what the MPA’s R rating refers to as “pervasive language,” to say the least.

Cole clearly has talent and knows where to place the camera, but not everyone can hit it out of the park first time around. In addition to Jacobson and Simpson, Jared Ian Goldman also produced. Check out my video review at the link above with scenes from the film.

Do you plan to see All Day and a Night? Let us know what you think.