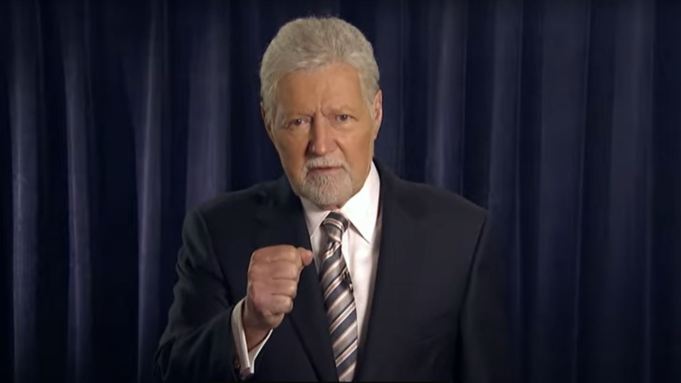 It’s been 16 months since Alex Trebek revealed his Stage 4 pancreatic cancer diagnosis. Today, the veteran Jeopardy! host gave a decidedly upbeat update on his health — and revealed a couple of other tidbits. Watch the video above.

Back in October, the veteran host said his cancer battle might force him to leave the quiz show he has hosted since 1984. But he looks fit and healthy in today’s video, even sporting a gray goatee. He notes that he “often takes [the] opportunity to grow some facial hair” during breaks in the filming schedule.

“I’m doing well,” he said. “I’ve been continuing my treatment, and it is paying off — though it does fatigue me a great deal. My numbers are good; I’m feeling great. In fact, during the break from the studio I even wrote a book that will be coming out July 21st.”

Trebek gave no details about the book but also noted that he’s been at home recording “openings for some very special Jeopardy! episodes. … For the first time ever, we are going to open the Jeopardy! vaults and take a look at some of our favorite episodes.

Those old episodes — including the first one he hosted — begin airing Monday and continue through August 14. Watch a promo the Jeopardy! vault below.

“I can’t wait to return to the studio and start recording shows for the new [37th] season in September,” Trebek added. “Meanwhile, my wish for all of you: Stay safe.”