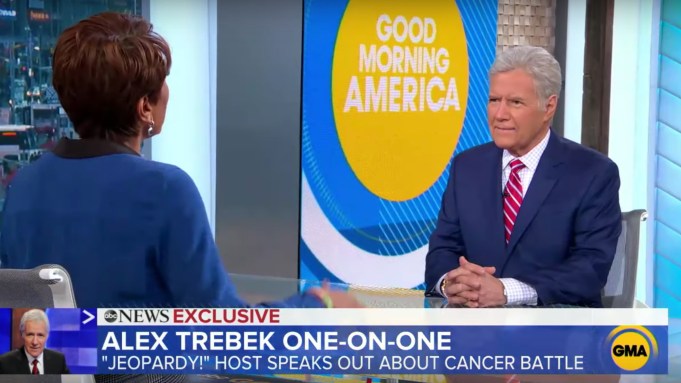 Jeopardy host Alex Trebek calls himself both “a 30-day cancer survivor” and “a bit of a wuss” in the typically optimistic but candid style that’s become his trademark in sharing updates of battle with stage 4 pancreatic cancer. During an appearance on ABC’s Good Morning America today, Trebek told GMA’s Robin Roberts about both his unexpected feelings of sadness and the delight he feels over fans’ good wishes.

Watch the segment above.

“My oncologist tells me I’m doing well,” Trebek told Roberts, “even though I don’t always feel it.” The 35-year Jeopardy host said he’s experienced kidney stones and ruptured discs in his life – “so I’m used to dealing with pain” – but that at least one side effect of his cancer treatment caught him off-guard.

“What I’m not used to dealing with is the surges that come on suddenly of deep, deep sadness,” he said, “and it brings tears to my eyes. I’ve discovered in this whole episode, ladies and gentleman, that I’m a bit of a wuss. But I’m fighting through it – my platelets, my blood counts are steady, my weight is steady, the numbers that are cancer indicators are coming down. I’ve got another chemo next week and we’ll do a review to see where things stand.”

Chemo, Trebek continued, “affects people in different ways, and people have to understand that. There’s nothing wrong with saying, ‘Hey, I’m really depressed today and I have no idea why. Why am I crying?’ “

Trebek also reflected on the well wishes he’s received from Jeopardy viewers and others.

“I think I’ve learned that I’m an extremely lucky individual,” Trebek said, “because in spite of the fact that this diagnosis is not a good one, I have managed to receive so much love from so many people, and quite often you don’t get that during your lifetime. After you’re passed, after you’re dead, people say he was such a nice guy, we really liked him, but I’m getting all that before that event. So it makes me feel really, really good.”

Trebek also spoke today about Jeopardy‘s latest sensation James Holzhauer, the 34-year-old gambler and Jeopardy champ who recently hit the $1 million mark in the shortest span ever in the game’s history.

“Jeopardy James,” as Trebek called him, has prompted the game show host to re-evaluate at least one long-held belief: “He has forced me to change a view that I have held for many years,” Trebek said, “and that is that the Ken Jennings record would never be broken.”

Check out Trebek’s GMA interview above.