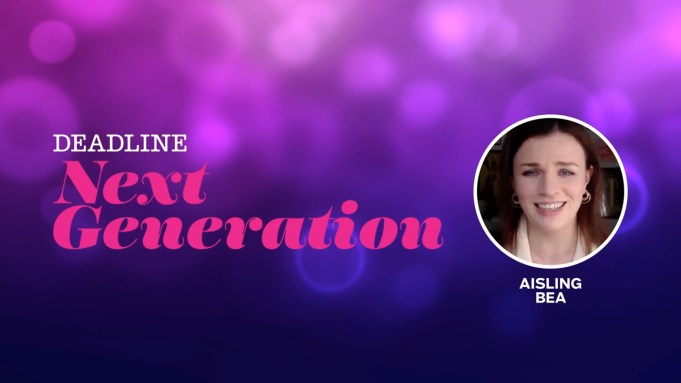 Aisling Bea has had a breathless 18 months. The Irish comedian and actress has gone from being a fixture on UK panel shows to creating her own transatlantic comedy series This Way Up, starring next to Paul Rudd in Netflix drama Living With Yourself, and featuring in ITV/AMC hit Quiz.

It’s taken a global pandemic for Bea to pause and reflect on the extraordinary period in her career, which has culminated in her being nominated for the Breakthrough Talent prize at the BAFTA TV Craft Awards. “To have it all last year meant there wasn’t much time to take it in as it was happening. So, [it’s been good] to have a bit of time to go, ‘Oh my god, cool! I was in that!’,” she says in an interview for Deadline’s video series Next Generation TV.

Bea has also been busy during lockdown writing the second season of her Channel 4 and Hulu comedy This Way Up, in which she stars alongside Sharon Horgan as a foreign language teacher recovering from a breakdown. It’s a show full of soul and Bea is particularly proud of the sibling relationship she captured with Horgan.

But her biggest buzz comes from acting in roles already written for her, she says. “Acting gives me the most pure joy,” she explains, adding that she enjoys the freedom of turning up on set and performing. This was particularly true of Quiz, Stephen Frears and James Graham’s drama on a notorious Who Wants To Be A Millionaire? cheating scandal. She played former ITV executive Claudia Rosencrantz and loved being “a small cog in a big machine.”

If Bea was a small cog on Quiz, this was certainly not the case on Jonathan Dayton and Valerie Faris’ Living With Yourself, in which she played the wife to two Paul Rudds. In the Next Generation TV interview, Bea reflects on how she landed the role, including the surreal experience of being flown to New York to do a chemistry read with Rudd. Check out the conversation above.