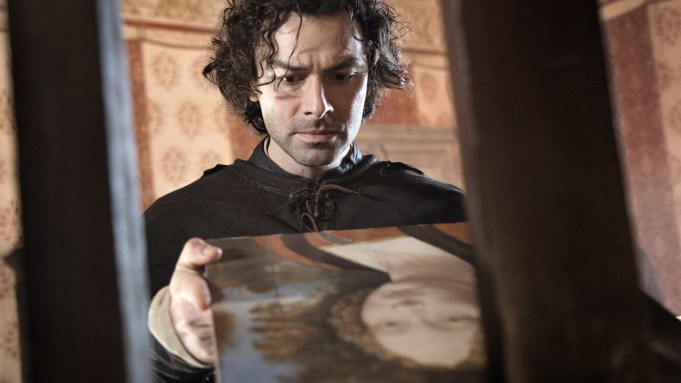 International drama series Leonardo, starring Aidan Turner as Renaissance genius Leonardo da Vinci, has wrapped after being one of the first major productions to resume during the Covid-19 crisis.

The high-end drama re-started on June 15 after a three-month hiatus. Today we can reveal drone footage, set to the show’s theme score by John Paesano (The Maze Runner), of the impressive 20,000 square meter backlot, which is one of the biggest in Europe. The lot took nearly five months to construct in the Italian studios of producer Lux Vide.

The series, which also stars Giancarlo Giannini (Catch 22) as Leonardo’s mentor, Matilda De Angelis (The Undoing) as his mysterious muse, Freddie Highmore (The Good Doctor) as a young investigator, and James D’Arcy (Homeland), will recount painter and inventor da Vinci’s extraordinary life through the works that made him famous, revealing the inner torment of a man obsessed with attaining perfection.

The Italian polymath is widely considered one of the greatest painters of all time, known for works including the Mona Lisa and The Last Supper. Although he had no formal academic training, many scholars regard him as one of the most diversely talented individuals ever to have lived. He conceptualized flying machines, a type of armoured fighting vehicle, concentrated solar power, an adding machine and the double hull, and he made substantial discoveries in anatomy, civil engineering, geology, optics, and hydrodynamics.

The series involved 3,000 crew, including actors and extras, and 2,500 costumes, and covered more than 50 filming locations. In April, Lux Vide released a sneak peak of Turner as da Vinci.

However, getting back into production was a complex undertaking. Anyone entering the studio had to undergo swab tests, pass daily through a corridor where they were sprayed with a disinfectant vapour, have their temperature taken twice a day, wear facemasks and gloves, and respect social distancing. Props were bathed in ultra-violet light overnight to sanitise them. You can read more about the whole process here in our deep dive with the show’s Italian producers Lux Vide.

Leonardo is produced by Lux Vide with RAI Fiction and Big Light Productions, in association with France Télévisions and RTVE, and co-produced and distributed worldwide by Sony Pictures Television. It was the first Italian production to receive the backing of pan-European co-production initiative The Alliance, created last year by major European pubcasters, RAI, France Télévisions and ZDF. Creators are Frank Spotnitz (The X-Files) and Steve Thompson (Sherlock).