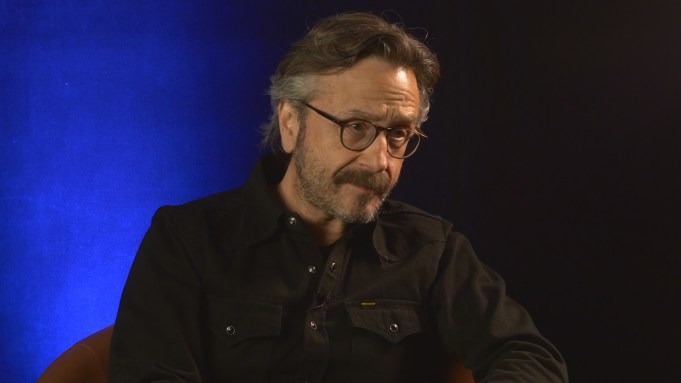 It took one character by the name of Sam Sylvia to convince Marc Maron he could add serious actor to a résumé that includes comedian, world-class podcaster, Grade A talk-show guest, radio personality, book author and many more titles in a quirky, successful career. But in the Netflix series GLOW he hit it right out of the box in Season 1, winning not one but two SAG award nominations including Actor in a TV Series, as well as a Critics’ Choice Awards nom for the same role as manager of an unusual all-female wrestling team.

As he tells me in the latest edition of my Deadline video series The Actor’s Side, he got the part by sending in an audition tape without even meeting the producers in person. It simply clicked, and now the show will enter a second season in June. There’s Emmy buzz as well.

GLOW isn’t the first time around the thespian block for Maron. He starred for four seasons on his IFC series Maron (playing a fictionalized version of himself), and he has had small roles in the likes of movies Mike and Dave Need Wedding Dates and Almost Famous. But despite being a well-respected stand-up and favorite of among others Conan O’Brien and Dave Letterman, his biggest pre-GLOW claim to fame may well be his internationally famous podcast, a train he jumped on before just about anyone else. He has interviewed upwards of nearly 1,000 notables — including then-President Barack Obama — in his home garage.

We talk about it all in the conversation you can hear by clicking the link above. This is an actor of many sides indeed.

To watch past episodes of The Actor’s Side, click here.