Continue to Deadline SKIP AD
You will be redirected back to your article in seconds
Skip to main content
September 17, 2019 5:24pm
10Comments 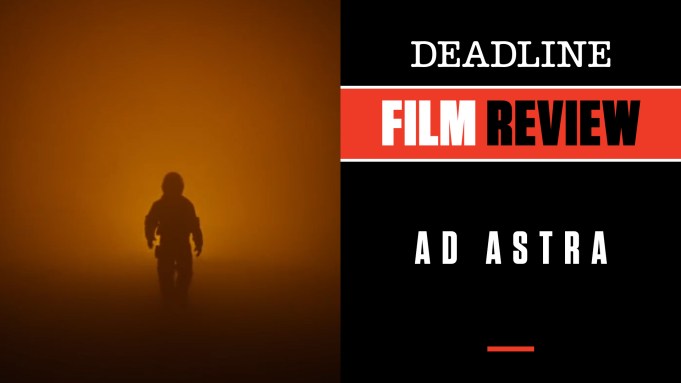 I have to admit I am still haunted by director James Gray’s 2016 film The Lost City of Z, which centered on an explorer on a mission to find evidence of an advanced civilization that lived in a remote and uncharted corner of the earth. I thought of it a lot as I watched Gray’s latest film, Ad Astra, which takes the idea of a risky journey to even greater heights. The latest film is every bit as fascinating, gripping, jaw-dropping and ethereal as I found Lost City of Z to be, but it’s also one where Gray and co-writer Ethan Gross are pushing new boundaries. Still, the two movies have a common link: that of a man venturing into unknown places both physical and deep within.

Brad Pitt plays astronaut Roy McBride in a movie set in the near future. He is on a mission to the outer reaches of the universe, where a pit stop and rover chase on the moon is just the beginning of a trip to Mars, Saturn and Neptune to find his father, the brilliant scientist and astronaut Clifford McBride (Tommy Lee Jones), who Roy has not seen in 30 years. Clifford was long thought dead after taking off 29 years before on a mission called the Lima Project to discover alien life in the deep universe, but because of signals received on Earth is rumored to be alive somewhere in space.

Communication had been limited to taped messages previously, but Roy has his own very personal reasons for embarking on such a dangerous assignment, in addition to one that can affect the future of mankind — really, ultimately coming to learn about himself and his own lost relationship with the father whose footsteps he is now following in order to get answers for his own life. It becomes a journey at once on the largest scale and the most intimate.

Don’t get me wrong, it is all not some metaphysical trip with the low-key Roy. Along the way there is Mad Max-style action on the moon (a place where consumer travel is now a reality), and on Mars for a brief period. There is also some frightening horror along the way involving vicious Aliens-style violence and bloodletting. But the bulk of this journey is mostly in the head. Supporting turns are also nicely handled by Ruth Negga, whom Roy meets on Mars; Donald Sutherland; as well as Liv Tyler, in briefly as Roy’s wife but largely seen in FaceTime-like scenes. This film belongs completely to Pitt, and to a lesser degree Jones, who gets some key moments after also largely being left to deliver video messages for much of the running time.

Gorgeously shot by cinematographer Hoyte van Hoytema, with spectacular effects and production design and a great moody score by Max Richter ( and additional music from Lorne Balfe), this is a movie made to be seen in Imax, or the widest screen possible, to engulf you in its own cerebral world — more reminiscent of 2001: A Space Odyssey than Star Wars, just to give you a clue. This is far more character-driven and introspective, but its themes and approach echo film classics from John Ford’s The Searchers to Apocalypse Now, and even the father-son dynamic that was so movingly a part of Field of Dreams, all movies in which our key player in on a mission that takes detours beyond what you might normally expect from big-budget Hollywood movies. This is deep stuff in deep space, and like Lost City of Z it will live in my mind for quite a while I think, an inner-stellar voyage not to be forgotten.

Producers are Gray, Pitt, Dede Gardner, Jeremy Kleiner, Anthony Katangas, Arnon Milchan, Yariv Milchan and Rodrigo Teixiera. Disney releases the 20th Century Fox film on Friday. Check out my video review at the link above with scenes from the film.

Do you plan to see Ad Astra? Let us know what you think.