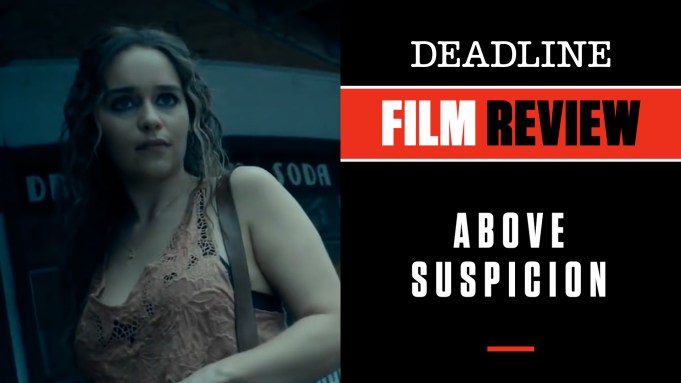 Shot in 2017, the noirish, Southern-fried crime thriller Above Suspicion finally hits North America this week after distribution delays, followed by Covid delays, kept it from screens. The Lionsgate and Roadside Attractions release finally will hit digital platforms and should find a welcoming audience for the kind of film that studios used to turn out regularly but now seems in short supply.

Coming from veteran director Phillip Noyce, whose credits range from Patriot Games and The Bone Collector to such critically acclaimed smaller films as Rabbit Proof Fence and Dead Calm, this is an expertly woven web of intrigue inspired by a true story set in a dead-end Kentucky coal mining town where one of the more notorious crimes in FBI history took place during the late ’80s. Adapting the book by New York Times reporter Joe Sharkey, screenwriter Chris Gerolmo (the Oscar-nominated Mississippi Burning) does not hide the fact that the leading character, Susan Smith (Game of Thrones alum Emilia Clarke), winds up dead. In pure Billy Wilder fashion, and with just a bit of whimsy for these dark proceedings, she actually narrates her own story after she is deceased a la William Holden in Sunset Boulevard.

This device immediately sets Above Suspicion apart from any number of docudramas or real-life stories, and Clarke runs with it as Smith explains how it all came about. She works on illegal drug operations and welfare scams out of the trailer she still shares with her ex-con ex-husband Cash (a surprisingly well cast Johnny Knoxville), who with his buddies is bad news all around. She has had a hard-knock life, marrying as a teen and not catching a break but now feeling a sense of empowerment when a straight-arrow new FBI agent named Mark Putnam (Jack Huston) arrives in town to investigate a bank robbery, bringing along his wife Kathy (Sophie Lowe) and infant child for what he plans will be a brief stint in law enforcement in Pikeville.

Spotting him on the street, Smith immediately seems a bit smitten and later really excited when he actually enlists her to be an FBI informant. The relationship isn’t strictly professional as she begins seducing him with her foot on his crotch under a restaurant dinner table and eventually into a steamy full-blown affair. The intensity of their involvement careens out of control, threatening his marriage and job as she becomes increasingly obsessed with him — a fact not lost on others, including his wife, who has to suspect something strange is going on. This handsome and ambitious FBI agent is in for more than he bargained for as things get, uh, complicated.

Noyce, who has navigated material like this before — particularly in the sizzling Dead Calm, which starred Nicole Kidman — has captured the feel of a coal-driven small community and the darkness lying beneath the surface. Shot in the area in which the real story took place in 1988 and ’89, Above Suspicion benefits from a strong dose of authenticity anchored by a revelatory performance from Clarke, who nails the demeanor and accent of a doomed soul trying to escape a beaten life. The star’s Game of Thrones fans might find her virtually unrecognizable here, but it is a thoroughly accomplished performance.

Huston also hits all the right notes as a young family man trying to move up the ladder of success but finds himself sucked into places he should never have gone. There is a strong supporting cast including Thora Birch as Smith’s beautician sister, Chris Mulkey and others including Knoxville, who nails his role. The fate of the real-life characters, including Putnam, is spelled out during the end credits, so be sure to hang in for that.

Producers are Colleen Camp, Amy Adelson, Mohamed AlRafi, Angela Amato- Velez and Tim Degraye. Check out my video review with scenes from the film at the link above.

Do you plan to see Above Suspicion? Let us know what you think.