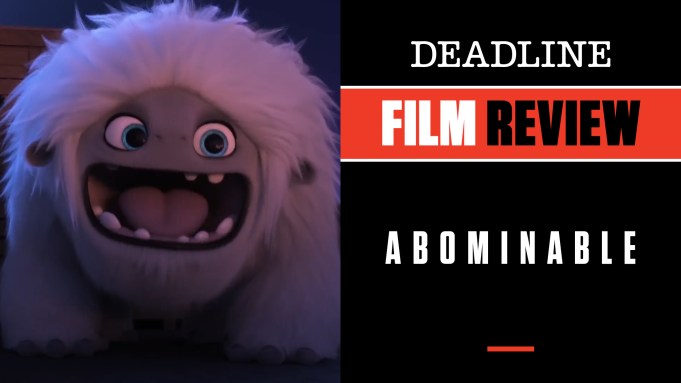 Animated features sometimes take years in development and production before hitting the big screen, so maybe it is understandable when similar ones start popping up all over the place. Such is the case with DreamWorks Animation and Pearl Studios’ latest entry, Abominable, the story of a young yeti on a journey to get back to his family on Mount Everest. It follows on the heels of last year’s Smallfoot and spring release The Missing Link. All three have at their center a mythical creature and their big adventure.

For my money the most appealing of those characters is the yeti named Everest in Abominable, just because he is so damn lovable. Actually this guy has more in common with the dragon Toothless in DreamWorks’ How to Train Your Dragon franchise in terms of the puppy dog qualities, and by extension I think that makes this film the best of the trio. It also is the least starry in terms of its voice cast, choosing diversity over big names to drive the narrative.

The plot is simple: The yeti (voiced by Joseph Izzo) finds himself far from home, somehow landing among the rooftops of Shanghai and only reminded of his true family and place when he sees a poster of Mount Everest. Thus he gets the nickname Everest when he is discovered by a young girl named Yi (Chloe Bennet) who, with the help of nutty neighbor Jin (Tenzing Norgay Trainor), and Peng (Albert Tsai) accompany Everest on a journey back to find his parents. Of course as is the case in most of these films, there are villains on their tail including Burnish (Eddie Izzard), who is determined to capture the yeti to prove to the world they exist, and an accomplice, zoologist Dr. Zara (Sarah Paulson). Neither has the yeti’s best interests in mind but serve to move the story forward with the usual dab of action and suspense.

Director Jill Culton’s screenplay centers mostly on the journey and emerging friendships, particularly Peng’s bonding with Everest and Yi’s determination to lead the way. It probably could have been called How to Train Your Yeti, but Culton invests it all with a surprising amount of wit and smarts for the yeti subgenre and creates an original confection that ought to please families, particularly the youngest members. It is a lot of fun, and happens to be gorgeously animated too. Rupert Gregson-Williams’ score is terrific. The co-director is Todd Wilderman. Producers are Suzanne Buirgy, Peilin Chou and Dave Polsky.

Universal releases the film on Friday. Check out my video review at the link above with scenes from the movie.

Do you plan to see Abominable? Let us know what you think.