Continue to Deadline SKIP AD
You will be redirected back to your article in seconds
Skip to main content
December 29, 2021 10:16am 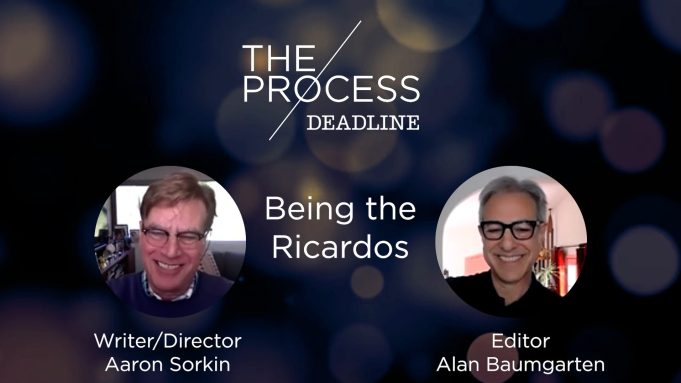 As he looked to refine Being the Ricardos‘ final moments, Aaron Sorkin received a note to which he was adamantly opposed, which turned out to be “incredibly important” for the film.

The note imparted to the writer-director by editor Alan Baumgarten and producer Todd Black concerned a postscript detailing the dissolution of protagonist Lucille Ball’s marriage to Desi Arnaz. While this was something that Sorkin had included in his script, he struggled while editing the film to find a proper place for it, subsequently concluding that he should cut the postscript entirely.

“Everywhere we put it, it didn’t seem to work, and then I was also disturbed by the fact that we have three narrators in the film: Linda Lavin, Ronny Cox and John Rubinstein playing the older versions of Jess [Oppenheimer], Bob [Carroll] and Madelyn [Pugh]. Why, suddenly, are the filmmakers coming in to have the last word?” Sorkin recalls thinking. “I remember using the analogy of Muhammad Ali not throwing that last punch at George Foreman, that I had said it was inelegant.”

While the postscript was ultimately reworded, it did end up in the film, largely because of his collaborators’ commitment to, and belief in, the idea. “And I’ve never been so happy to be convinced of something,” says the director.

Part of what this scenario spotlights, from Sorkin’s perspective, is the “diplomatic role” the editor is often tasked with playing, as a mediator between the director and producer, who shares an equally fleshed out vision of a given project. In conversation with the filmmaker in the latest edition of The Process, Baumgarten says that while it can be uncomfortable to be in this position, it’s one that he’s learned to embrace. “I guess the bottom line is, I’m protecting the film, what I think is best for the film. So, I’ll argue my case to anybody, whether it’s to you or to Todd or between all of us,” he tells Sorkin. “In this particular instance, the fun about that was, we were convincing you to do something that you’d originally written into the script anyway. It was your idea in the first place.”

Being the Ricardos examines the romantic and professional relationship between the aforementioned I Love Lucy stars, portrayed by Nicole Kidman and Javier Bardem, honing in on a moment when they find themselves threatened by shocking personal accusations, a political smear and cultural taboos. The drama takes audiences into the writers’ room, onto the soundstage and behind closed doors during one critical production week of their groundbreaking sitcom, as the pair face a crisis that could end their careers and another that could end their marriage. Baumgarten came to the project after collaborating with Sorkin on his first two directorial outings with Molly’s Game and The Trial of the Chicago 7, having notched his second Oscar nomination for his work on the latter.

Another major point of discussion between the pair on Ricardos concerned the approach to black-and-white scenes on the set of I Love Lucy, which were key to the story, even if they amounted to less than three minutes of the final film. For Sorkin, it was important to convey the idea that “those shards of I Love Lucy” were happening inside Ball’s head. “What we’re dramatizing is that Lucy is a comedic chess genius—that when she reads something on a page at the table read, or hears something being pitched in the writers’ room, or when she’s at rehearsal, she’s able to project ahead to Friday night. Is this joke going to work? How’s this going to be in front of the audience? She’s able to see everything,” he says. “I gave [Alan] some things to work with—a push-in, very tight shots of a pencil tapping, that kind of thing—but it’s up to [him to finesse these moments].”

“When you say ‘shards,’ I love that word. You came up with it on Chicago 7, and I’d never heard anybody else use it,” Baumgarten adds. “People say ‘smash cut’ or ‘flash cut,’ which is fine, but it’s overused, and shard is a very fresh thing for me. And it does describe so perfectly well what you were looking for.”

While finding the right rhythm is always a principal challenge in cutting Sorkin’s films, Baumgarten says that it’s also a source of “fun and joy.” Another, for both collaborators, is witnessing the fruits that emerge from their exchange of ideas.

“My favorite moments with you in the editing room [are] when I’ll come in and you’ll say, ‘Listen, we didn’t talk about this, but I’ve tried something. Take a look at it,'” says Sorkin, “and so often, you’ve done something that’s raised a scene a whole letter grade.”

“Well, thank you, and I appreciate that you’re open to that and always say, ‘What do you got? Show me something,'” adds Baumgarten. “That’s the best part for me as well, in terms of our collaboration, and I think with any editor, that opportunity to just be trying things and showing you new ideas.”

Sorkin says that since he’s transitioned to directing, he’s come to love the process of editing. He adds that this is largely due to his collaborative relationship with Baumgarten, and in spite of the fact that his ability to discuss the craft is relatively limited. “I think if I have a strength as a director, it’s knowing what my weaknesses are as a director, and I try to make up for those weaknesses by having an editor, a DP and a production designer whose work I love, and who I can trust to tell me when things aren’t going well,” Sorkin tells Baumgarten. “You’ve worked with directors who can speak to you in a much more sophisticated language than I can. So, with you, it’s a bit like talking to your dog. You know, ‘Are you hungry? Are you thirsty? Just tell me which one and I can give you that.'”

“I think you’ve raised the bar so high with your screenplay, plus the other collaborators you [bring aboard], plus the actors that it just puts a lot of pressure on me to try to raise the bar,” says Baumgarten. “And I’m just doing my best to move the bar a little bit higher.”

Adds Sorkin in closing, “Your best is very good, indeed.”

In today’s edition of The Process, Sorkin and Baumgarten also delve into the latter’s career journey after graduating from NYU Film School, his early experiences assisting such esteemed editors as Wendy Bricmont and Mark Goldblatt, his nostalgia for editing on film, the experience of working with Daniel Pemberton’s Ricardos score, the challenge of perfecting the film’s “carefully choreographed” opening and more.

Check out their entire discussion above.