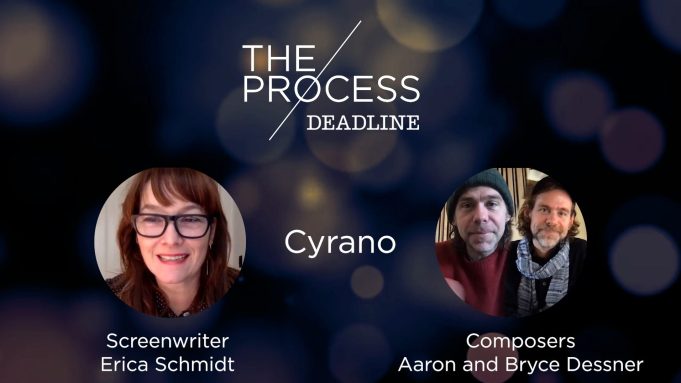 In recent years, composers Aaron and Bryce Dessner have found a unique challenge in Cyrano, scoring musical adaptations of the classic 1897 Edmond Rostand play Cyrano de Bergerac first for the stage, and then for the screen.

Bryce says that when Erica Schmidt first approached him and his brother to work on her stage musical, starring her husband Peter Dinklage and Haley Bennett, he was “kind of incredulous” about the prospect. “It was exciting, but also just sort of impossible to imagine,” he recalls in the latest edition of Deadline’s The Process. “It was also at a point in our career where it wasn’t like top of the list [to make] a musical.”

What changed Bryce’s mind about taking part in the show, later performed at both the Goodspeed Opera House in Connecticut and the Daryl Roth Theater in New York, was attending a live reading of the script. “It was really beautiful,” he says, “and I think that that experience of hearing [Erica’s] version of it really convinced me.”

After finding “a really rich artistic collaboration” with Schmidt in his first theater outing, he and Aaron would reinterpret the score and songs crafted for Cyrano, for a musical drama of the same name directed by Joe Wright. The film from MGM and United Artists Releasing marking Schmidt’s first produced screenplay centers on Cyrano de Bergerac (Dinklage), a poet and swordsman who falls in love with a woman named Roxanne (Bennett) but is too self-conscious to pursue her. After discovering that she has feelings for a soldier named Christian (Kelvin Harrison Jr.), Cyrano decides to aid their burgeoning romance by writing love letters for him to send to Roxanne.

Aaron and Bryce Dessner are two of the multi-instrumentalists at the heart of The National, the Grammy-winning indie rock band fronted by Matt Berninger. The Cincinatti natives began composing for film less than a decade ago, and have hit on their biggest year in that arena to date with the recent release of Mike Mills’ A24 pic C’mon C’mon, and the upcoming Cyrano.

Schmidt notes that the songs crafted for the latter, with lyrics by The National’s Berninger and Carin Besser, were intended not to be “propulsive,” as is the case in many musicals, but rather to be “intimate” and “reflective.” In the end, she says, they became “the heartbeat” of the piece, tapping into the universal fear of being unloveable.

“It was actually what poetry is, that kind of window into the soul,” she says. “As opposed to composing for the audience, or showing off, [the music was] much more soulful.”

“It’s possible that actually the songs have something more in common, maybe closer to some opera…in terms of the way the songs are serving a narrative,” adds Bryce Dessner. “They really are taking that poetry and making it breathe in a different way.”

While the film version of Cyrano was developed over the course of two or three years, it would ultimately be brought to life during the Covid-19 pandemic. For both Schmidt and Dessners, working on the project served a similar purpose, providing artists cut off from their normal means of expression (live theater and touring, respectively) with an outlet that was sorely needed.

In conversation on The Process, Schmidt and her musical collaborators delve into her impetus for adapting Cyrano, the transformation of its songs in their move from stage to screen, the experience of working with the London Contemporary Orchestra, the trip to Colonial Williamsburg that sparked the Dessners’ interest in music, the birth of The National in August of 1999 and more.