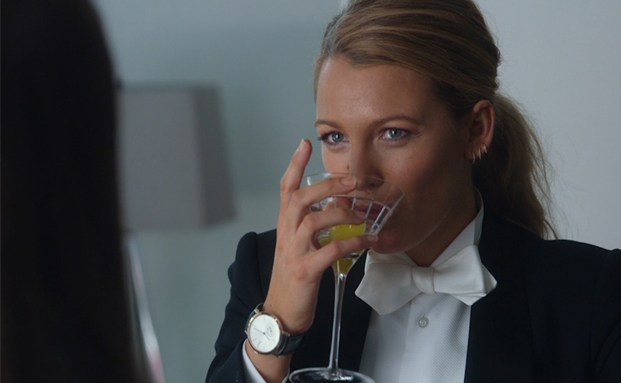 Paul Feig certainly knows his way around comedies centered on some of the best actresses around. Bridesmaids, The Heat, Spy and the all-female Ghostbusters remake are a sampling of his sensibilities in this area of the movie world. He is back at it, following a little of the Hitchcock path, in the comedy mystery A Simple Favor, which sees plum roles for Anna Kendrick and Blake Lively in a tale of two very different suburban mothers drawn into each other’s world, and for at least the first half of this thing it really works.

As I say in my video review (click the link above to watch), A Simple Favor had me at hello. Kendrick plays Stephanie, a widow raising her son Miles (Joshua Satine). She is the ultimate PTA mother and also a vlogger offering helpful kitchen tips on her little Internet show. One day while picking up the kid at school, she meets her opposite number, Emily (Lively), a take-no-prisoners, rather upscale, glamorous type with a big PR job, cool husband Sean (Crazy Rich Asians’ Henry Golding in his second film), a cool high-tech house and a gift for mixing martinis at any time of the day.

Emily arranges a playdate with her kid, Nicky (Ian Ho), and the two moms get to know each other, eventually sharing whoppers of secrets in between the drinks. So far, so good — until one day Emily asks Stephanie for “a simple favor”: to pick up Nicky and take care of him for a few hours. But she disappears, nowhere to be found, and soon Stephanie turns detective in trying to solve the mystery of Emily’s AWOL-ness. Was she murdered? Did Sean have anything to do with it? Where is she?

All of this plays out in classic Hitchcockian, noirish fashion as Feig soon seems more interested in the complexities of the plot than the delicious characters he has set up in the first part of the film. It gets very complicated as Stephanie finds herself involved with gorgeous Sean and nobody is who they seem to be. It appears that Feig and screenwriter Jessica Sharzer (adapting 2017 best seller Dancing Bell) have in mind a sort of comedic lighter take on a Gone Girl-type twisted tale.

It all gets a bit too convoluted but still is a cut above thanks to a terrific cast led by Kendrick and Lively. Golding proves himself every bit the potential movie star as he showed in Crazy Rich Asians, and the supporting cast is very fine, with Jean Smart in for a hilarious scene as Emily’s mother, Andrew Rannells as a fellow parent, Rupert Friend as Emily’s foufou fashion firm boss and Linda Cardellini very funny in a brief turn. The movie is also very sleek and cool-looking, and Feig makes it work nicely on the production end of things. It is lots of fun as far as it goes, and if the tone gets a little lost along the way it is still a trip worth taking. Producers are Feig and Jessie Henderson. Lionsgate releases it today.

Do you plan to see A Simple Favor? Let us know what you think.