Continue to Deadline SKIP AD
You will be redirected back to your article in seconds
Skip to main content
November 26, 2018 1:37pm 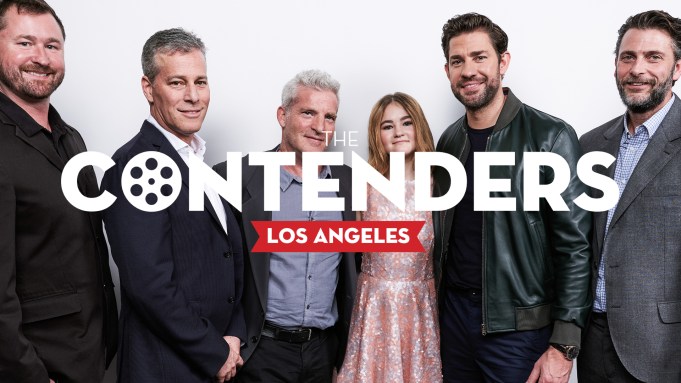 Even the surest of Oscar bets are open to last-minute surprises. But can anything come close to unseating the front-runner status that A Quiet Place‘s sound design team has held since the film’s April debut? The Platinum Dunes-produced Paramount film rewrote the rule book as it presented a world dominated by terrifying creatures that prey on the slightest noise, and one family’s attempt to survive by staying very, very silent.

“They definitely were the first phone call,” producer Andrew Form said onstage earlier this month at Deadline’s annual The Contenders Los Angeles event, referring to supervising sound editors Erik Aadahl and Ethan Van der Ryn. “I’m sure they get the same call from every producer. We’re always calling them and begging them, ‘What’s your schedule like? We don’t have any money. It’s a low-budget movie. And I promise, this time sound is really important, please read it.’ And I think they’ll say, ‘Finally, the producer wasn’t lying — the sound is so important.’ ”

Also on the panel at the SRO DGA Theater, Aadahl and Van der Ryn echoed Form’s comments. “For us it was just so exciting to be working with filmmakers who were just constantly telling us, ‘Just push it. Experiment. Be bold and see where you can go with it,’ ” Van der Ryn said. “That was so liberating for us, [and] just such a fantastic experience to have, and I have these guys to thank for pushing us so hard to push the medium.”

A Quiet Place stood in stark contrast to the received wisdom of Hollywood filmmaking to make everything bigger and louder. “The most exciting thing was just inverting that paradigm to the point where there’s three points in the film where we actually have absolute digital zero sound,” Aadahl said. “That’s ground zero, and every shade of quiet is some building upon that ground zero. It was really an exploration of how many shades of quiet could we explore, from nature sounds to the exquisite ways that this family has adapted to this world to survive through understanding sound.”

At the heart of the film is Millicent Simmonds’ character Regan. Like her character, Simmonds is deaf in real life, and for director John Krasinski, capturing her perspective on the world was essential to telling A Quiet Place‘s story in the best way.

“It was all based on me talking with Millie and her mom about what Millie can hear in real life, and we wanted to make it so unique and so realistic,” he said. “One of my favorite compliments of the whole sound process was seeing her mother after the premiere and her mother was very sweetly crying and saying, ‘I’ve always wanted to know what my daughter’s experience was and I finally got to experience that in this movie for the first time.’ I wept for days. I’m still weeping now.”

For Simmonds herself, “The experiences and relationships I made throughout were indescribable; it was overwhelming and very special,” she said. “I was surprised that the sound editors really caught my experience and my perspective of the world in this film. Living with no sound, I was so surprised, and I do have to compliment you guys on your genius.”