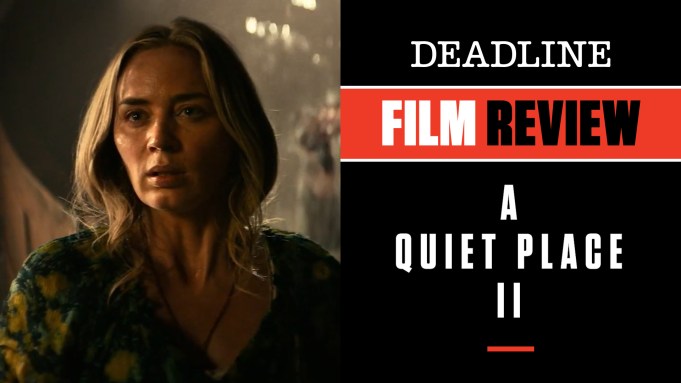 After a 14-month delay due to the pandemic, Paramount finally gets to release its much-anticipated sequel A Quiet Place Part II in theaters on May 28, and box office prognosticators are virtually staking the future of exhibition on it. Maybe that is because, unlike so many other films (some from the very same studio), this one steadfastly has avoided any temptation to alter its course, instead waiting out the storm, and it is exclusively hitting the multiplex and not any odd combination of viewing alternatives, at least at first. What a concept! Along those lines, Paramount was the first studio to offer press screenings only in a theater, picking up right where it left off with three screenings Monday for L.A.-based press at AMC Century City Imax. No links for this one — and it was great to see it on the big screen, right where it belongs.

And speaking of “picking up right where it left off,” that is pretty much what this follow-up to the 2018 original does — almost literally picking up right after the ending of that smash hit that made about $340 million worldwide while costing less than $20 million to make. Naturally, the studio would want a sequel and it has gotten one that continues the harrowing story of the Abbott family as they fight off ugly, scaly, vicious aliens who remain super-sensitive to any sounds. Make a noise and risk being jumped by one of these toothy creatures who seemingly wiped out much of Earth’s population — or so it appears, as just a few hearty survivors are left to fight the good fight.

They include Evelyn Abbott (Emily Blunt, who won a SAG supporting actress award for the first), her baby and two teen kids, Regan (Millicent Simmonds)) and Marcus (Noah Jupe). Dad Lee (who was played by John Krasinski, who not only starred in the original but also co-produced and co-wrote and directed but was killed off by the end), actually does turn up here in a pre-title-credit sequence that acts as sort of a brief prequel, showing how this idyllic American small town became a living nightmare as the alien invasion suddenly hit it. But once the film’s name pops up on screen, the story shifts to 474 days later and, as aforementioned, right where we left the Abbotts.

It is all very effective and wastes no time as they must continue a fight for survival against some very scary opponents who have eaten all of their neighbors for lunch and still are hungry. Things have gotten tougher as they also must deal with the grief of losing Lee and still try to stay alive by making as little noise as possible. Director Krasinski sets a pace for the action that is relentless, and clearly he also has become an expert in delivering genuine, jump-out-of-your-seat scares at various intervals. That is no easy trick considering it is all very similar to what they had to endure in the first film but expanded here from their farm into other locations where some new characters are introduced, notably Emmett (Cillian Murphy), an acquaintance they stumble upon who now is a despondent loner after having lost his family in the fight. Not sure of him, nevertheless they manage to co-exist, especially when Regan takes matters into her own hands and discovers an island on the map that might hold the clue to defeating the enemy, a sound clue this deaf young warrior is well equipped to understand. No spoilers here except to say it involves the Bobby Darin song “Beyond the Sea.” For a lot of the 97-minute running time Regan sets off on her mission, while Evelyn, Marcus and the baby do their thing elsewhere. Whether there could be yet another sequel if this film does indeed help save the future of theaters, well, you could make a case for one.

There always are diminishing returns with movies that exist because of the box office success of their predecessors, but A Quiet Place Part II works on its own terms in delivering the thrills audiences are going to expect, and in this case Krasinski has sole screenplay credit as well and has really brought the monster aliens into full co-starring status. Maybe it is me, but part of the genuine scares of the original was the unseen, the true fear possibly lurking around the corner. We have that this time, but it is a much more visceral affair and a much busier job for the VFX crew.

Still the film’s theme of community and parents doing anything to protect their kids gives it some of the emotional heft that characterized the original, and helped it break through the clutter of the well-worn genre. This is a sequel that seems viable, particularly after living through a pandemic that weirdly reinforces the themes of survival that run through the heart of Krasinski’s horror show and might give it more pertinence than had it been released when initially planned. On the most basic level, it definitely is a terrifying time at the movies, if that is what you are looking for this summer.

Simmonds, who is deaf herself, is terrific once again in a real kick-ass role, while Blunt, Jupe, Murphy and another newcomer to the franchise, Djimon Hounsou (!), don’t disappoint. Production values are first-rate in every way. Producers are Michael Bay, Brad Fuller, Andrew Form and Krasinski. Check out my video review with scenes from the film at the link above.

Do you plan to see A Quiet Place Part II? Let us know what you think.