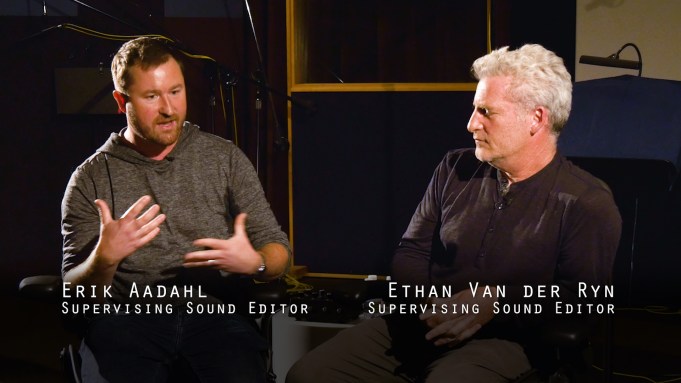 On examination of those behind the filmic curtain—creating the sonic palette through which to feel a world—any number of descriptors seem to apply. Magicians, wizards and puppet masters who have trained themselves in the art of emotional manipulation, sound editors are too often among those craftsmen and women taken for granted, when the reality is that no film could function, or pull the audience in toward the screen, without their dedicated, passionate work. The supervising sound editors behind Paramount Pictures’ surprise horror smash A Quiet Place—deftly directed by John Krasinski—Erik Aadal and Ethan Van der Ryn are among those whose contributions are so undeniable that they happen to elevate the craft as a whole.

The latest guests of Deadline’s Production Value Video Series, the close collaborators admit that the huge success of the April release was not only a relief, “but [also] a vindication.” “When we were working on the film, we’re like, ‘This is so unique, and maybe it’s too out there for audiences. Maybe we’re taking such experimental risks that they’re just not going to get it, or they won’t be patient with these long stretches of holding your breath, and different gradations of quiet,'” Aadahl shares. So, when the film moved through its breathtaking final moment at its SXSW premiere, and the Austin audience erupted in riotous applause, it meant everything, an affirmation of Krasinski, Platinum Dunes and every artist who stuck their neck out on the line to try something different.

Of course, for any sound editor, a film like A Quiet Place would be the mountaintop—the long-held dream. Set in a post-apocalyptic world where a family must live in total silence, or be killed by monsters lurking outside their doors, the project allowed sound to become a character in and of itself. Starting at the script stage Bryan Woods, Scott Beck and Krasinski came up with the rules for their world—which sounds were safe and which were almost certain to bring imminent death. Putting their characters through the ringer with a (naturally) noisy pregnancy, the writers also envisioned the means through which they could snuff sound out, for their own protection.

Fusing the framework of a family drama with the scenarios of a heightened, creature-driven horror pic, A Quiet Place proved, for Aadahl and Van der Ryn, to be the best of both worlds, a middle ground between their Oscar-nominated achievements on Argo and Transformers: Dark of the Moon.

While the pair have their “little goody bag of favorite flavors” to draw from—a library of sounds taken from years of experimentation—more often than not, they record fresh material for each project they’re taking on. In Van der Ryn’s words, this is about the desire “to create an authentic sonic world for that specific story that we’re helping to tell.”

With A Quiet Place, Van der Ryn says, the challenge was to strive for balance, examining “how much sound is enough to keep it scary, but not too much to put it over the edge of being unbelievable.”

In terms of plot, one of the major hurdles came with Millicent Simmond’s Regan, a young, deaf woman, who is particularly vulnerable to dark forces, exemplified in a moment where a creature is approaching her from behind. “With sound and picture, we have to tell these complicated stories, hopping between the sound POVs of these two characters, the creature and Regan. We realized at one point we needed a little bit more time on the visual effect of the close-up of the creature before its ears fillet open, so it’s clear that we’re hearing audience reality perspective, and now, we’re going into the head of the creature,” Aadahl explains. “That was a situation where sound and picture can work together, and evolve the film together.”

For more from our conversation with the sound editors of A Quiet Place, take a look above.