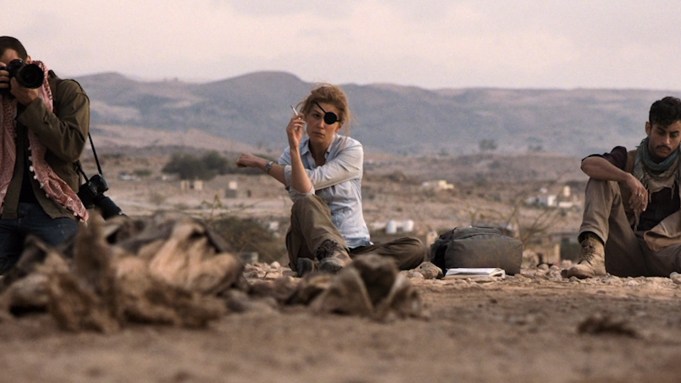 Although flawed and fraught with demons and PTSD of her own, Marie Colvin was unquestionably a fearless and great war correspondent whose story serves as an antidote to all those currently trying to denigrate journalists and their profession with cries of “fake news.” She consistently risked her life, and finally lost it, in the pursuit of the truth and the stories of those who might otherwise be ignored.

As I say in my video review above, it is entirely appropriate that A Private War, the film version of her life that stars Rosamund Pike, is in the hands of a filmmaker, Matthew Heineman, who is known previously for his risky work in documentaries. Those titles include Oscar-nominated Cartel Land, in which he chased dangerous drug cartels, and City of Ghosts, about one Syrian town’s effort to fight Isis and save their city. Although this first narrative effort, it feels like Private War almost could be one of his docus. Whether taking place in Sri Lanka (where Colvin lost an eye and donned the eyepatch she wore the rest of her life) or the Middle East and finally the defining moments in the fight to bring the Syrian civil war to the attention of the public, Heineman and his screenwriter Arash Amel strive to make these scenes as gut-wrenchingly real as possible, and they succeed.

Perhaps less compelling by comparison are the passages where we see Colvin back in London, dealing with her rocky personal life, as well as professional interactions with her London Times editor Sean Ryan (Tom Hollander). The film switches back and forth to tell her story — one that includes a marriage, divorce and remarriage — as well as a new relationship that has been fictionalized for dramatic purposes; Stanley Tucci plays a composite character of the real man who romanced her later in her career. Perhaps the most intriguing relationship is the one that was not romantic, but lasted nearly a decade or so between Colvin and war photographer Paul Conroy, who accompanied her to some of the world’s most daunting hotspots and caught the pictures that ran with her unforgettable text. Conroy is played by Jamie Dornan, thoroughly shedding his recent Fifty Shades of Grey persona and effectively playing a man on the front lines with this true journalistic warrior.

Still, it is Pike’s film all the way and she has never been better, losing her British accent and reserve to play this gritty, Long Island-accented reporter who thrust herself into impossible situations in order to get the story — a person who perhaps became addicted to the chase and ultimately didn’t know when to stop. Indeed, Colvin is presented as fearless, as well as turning to alcohol and other vices that made her less than the perfect role model, and a person married to her career more than anything else. The film’s final battle, in Homs in Syria, is devastating stuff to watch but 100% true as it actually played out during a CNN interview she did in the most dire of circumstances; Pike is, in a word, magnificent. In fact I actually mistook footage of the real Colvin at the end of the film to be Pike. She has uncannily channeled Marie Colvin.

The movie that Heineman has made is a must, and an urgent story for our times. It tells the truth. Producers are Matthew George, Basil Iwanyk, Marissa McMahon, Charlize Theron and Heineman.  Aviron will release it limited this Friday before going wide.

Do you plan to see A Private War? Let us know what you think.