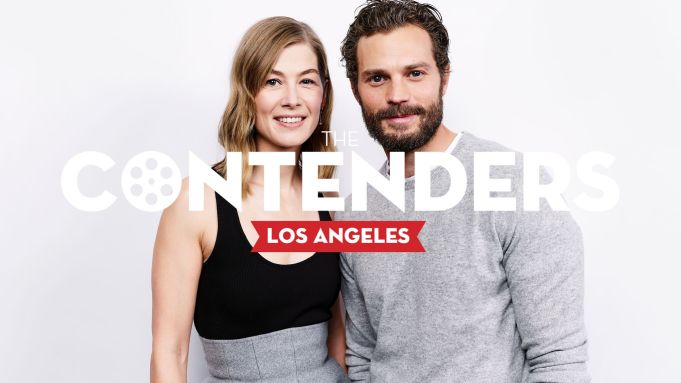 Rosamund Pike knew when she met Matthew Heineman that the director-producer of A Private War would not create “the sort of adrenaline junkie version” of war correspondent Marie Colvin. Pike stars in the film as famous war correspondent Colvin, who was killed while covering the siege of Homs in Syria while working for The Sunday Times. Jamie Dornan also stars as Colvin’s photographer Paul Conroy, who worked with Colvin on the front lines.

Speaking at Deadline’s recent The Contenders Los Angeles awards-season event, Pike said she trusted Heineman, an Oscar-nominated documentarian (Cartel Land, City of Ghosts), in telling Colvin’s story. A Private War is Heineman’s narrative feature debut and Arash Amel penned the script, which tells the true tale of Colvin, a fearless and rebellious spirit driven to the front lines of conflicts across the globe to give voice to the voiceless.

“We were certainly going to see someone who was so fierce in pursuit of a story,” Pike told the packed DGA Theater crowd of Academy and guild voters, “but we were going to see the vulnerability of that same person when alone with what you’ve seen and the complexity of wondering whether it’s OK to feel that, because you can always go home, you don’t have to stay in the zone where people are suffering.” She added, “I think that conflict often made her stay longer than was healthy. She always put other people’s suffering before her own sanity, her own health and her own mind, and we wanted to deeply understand PTSD in this movie.”

Dornan noted he felt particularly fortunate Conroy accompanied him on the shooting of the film, which “I think it was incredible for the whole crew, for the whole team, to have Paul’s support because no one is more affected by what he’s seeing in this movie than the man himself, so to have his support throughout the process was incredible,” Dornan said.

Heineman, whose mother was a journalist and who grew up in the world of journalism, understands its importance. The film to him, he says, “is both an homage to this amazing, complicated woman, [and] to journalism and people who are out there fighting for the truth and shedding light on dark corners of the world.”