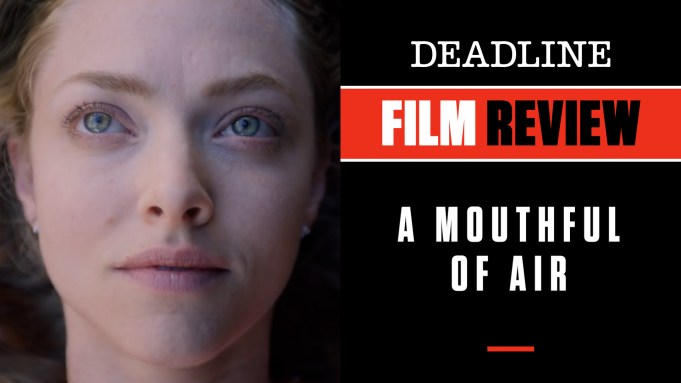 Amy Koppelman writes and makes her feature directorial debut with A Mouthful of Air, which deals with postpartum depression. It’s a subject that doesn’t exactly top the list of surefire box office draws, but fits perfectly into Koppelman’s entire creative oeuvre as primarily a novelist whose main topic is motherhood and women’s mental health issues. This is only her second film ever, the first being 2015’s I Smile Back, which she wrote and which starred Sarah Silverman as a mother of two battling severe addictions. It brought Silverman a SAG Award nomination but, like Koppelman’s latest, is dark and challenging material.

In fact, right at the top before the film actually starts, a message is slapped across the screen warning audience members who may have suffered from depression to proceed with caution in watching this movie. That may be just too much of a hint of what’s in store.

That is not to say what the filmmaker has to say is not worth the effort, it’s just that you should be warned it might be terribly disturbing for some viewers. They should also have warned of unnecessary plot contrivances that get in the way of an extremely serious issue all too often ignored by Hollywood. But thanks largely to an effective and ultimately moving performance from Amanda Seyfried, this film about a children’s book author and illustrator who falls into deep depression after giving birth, attempts suicide, and then eventually goes on to get pregnant a second time while continuing to take anti-depressants is difficult to absorb under any circumstance.

It is not easy to digest as you feel tension and unease watching Seyfried’s character falling down a rabbit hole, battling her demons. On the plus side, Sony Pictures Worldwide Acquisitions, which picked up the film in April, should be applauded for releasing this Stage 6 production only in theaters this weekend as it bucks the trend of subject matter coming from studios and could provide some quiet catharsis — especially among women who might find themselves helped by watching this all play out, and by men who might need to learn some empathy. The storytelling however is uneven.

Koppelman herself suffered from postpartum depression but admits this is not strictly autobiographical. We meet Julie Davis, mother of a young boy and wife to an understanding husband Ethan (Finn Wittrock) who also spends her days writing children’s books starring her main character Pinky Tinkerbink while trying to keep her family life together. The director slowly reveals dark family secrets, however, that come to an early boil in a scene where Julie agrees to venture out on a date night with Ethan and his sister Lucy (Jennifer Carpenter) at a local sports bar. It is particularly tense between the two women as Lucy is clearly not having the idea that whatever issues Julie has had in the past are now over. We soon learn after the birth of her son Julie suffered very severe postpartum reactions and in fact attempted suicide. The crux of the film, however, revolves around her second pregnancy and the impending arrival of a new child. Will history repeat itself?

Obligatory scenes with her psychiatrist Dr. Sylvester (Paul Giamatti) deal with all this, as well as others involving Julie’s mother Bobbi (a spirited Amy Irving) who is trying to be ever helpful, and conflict with Ethan, and most importantly her battle within. There is also yet another secret revealed in brief flashbacks and a totally contrived situation involving her mentally ill father (Michael Gaston) from whom Julie is estranged but who out of the blue arrives to help paint the new baby’s room. Conflating this with the core issue of postpartum troubles seems like a melodramatic road that gets in the way here. That aside, this is a woman who seems to love life, love her family, and just can’t quite get around an illness that constantly fights her quest for a normal life and her own self-worth. It is undeniably sad but given real heart through Seyfried’s poignant performance. Koppelman should be commended for not wrapping things up in a neat and merry conclusion. But ultimately, the main reason to see this film, if at all, is for Seyfried.

Check out my video review above with scenes from the movie. Do you plan to see A Mouthful of Air? Let us know what you think.