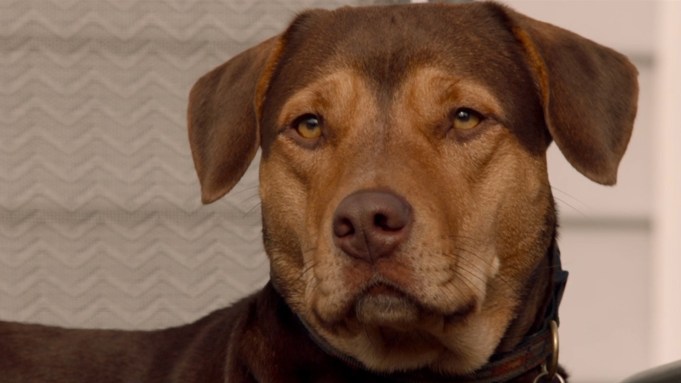 I am a sucker for dog movies. From Old Yeller to my favorite My Dog Skip, and from Homeward Bound: The Incredible Journey to Benji, I just can’t get enough of them. Emotionally I am a wreck after seeing a good one.

That was also the case with 2017’s A Dog’s Purpose, which was the first in a planned series of canine films based on W. Bruce Cameron’s books. Although not directly a sequel to that movie (Universal is actually opening that one from Cameron, A Dog’s Journey in April) we have yet another Cameron-penned pooch saga with A Dog’s Way Home, the story of Bella, a pitbull outlawed by the city of Denver’s regulations against her breed (for real) who becomes lost in the Colorado Rockies and must find her way back to her loving master Lucas (Jonah Haver-King). That is basically the plot here, and I have to say the script adapted by Cameron and Cathryn Michon does no favors for the human actors, who are all stuck with basically one-dimensional roles compared to the Meryl Streep-level acting turned in by the pooch playing Bella — a soulful-eyed and very sweet pitbull who is the definition of love and loyalty, but in peril because of the evil animal control officer determined to follow Denver’s archaic laws about keeping these dogs locked up to the letter. There is also a mean neighbor angling to get rid of the pooch and feral cats who live under the house next door, and there are the local cops called into action at different points.

To avoid this indignity, Lucas fortunately had taught Bella the phrase “Go home” to make sure she was not on the streets at any time, and it is those words that power her determination over a two-and-a-half-year journey back to her loved ones.

During that time, she finds herself involved in a number of adventures and encounters with various humans and animals (notably a baby cougar she names “big kitten” that she rescues after its mother is killed by hunters). It is beautifully shot and skillfully directed by Charles Martin Smith, an actor-turned-helmer who has made several movies in this genre like Air Bud and the Dolphin Tale films, and also starred in the wonderful Never Cry Wolf. He certainly knows how to work with animals, and he gets wonderful work from them which is all that matters in a movie like this — especially this one, which suffers from a hackneyed script and voice-over dialogue in the head of Bella that is acted by Bryce Dallas Howard. Yes folks, this IS a talking dog movie – sort of. Bella’s dialogue is all internal and fortunately we don’t have to see any animatronic mouths moving. Yes, there is also some CGI animal work involved, but it doesn’t detract.

The film does have an accomplished cast of human actors including Ashley Judd as Lucas’ mother, Edward James Olmos as a homeless vet who chains himself to Bella in a remote area and then dies, and Wes Studi. Haver-King is Bella’s kind master, but he doesn’t have much to do other than be, well, kind. This isn’t a movie you go to because it is aiming for Oscars. It is a sweet family film that won’t disturb the kids and may even keep them engaged for its 96-minute running time. In the pantheon of truly great dog movies it doesn’t rate high, but it delivers what it needs to deliver. Nothing more, nothing less — plus it has that dog.

Producers are Cameron and Gavin Polone. Sony Pictures unleashes it today. Check out my video review above that includes clips from the film.

Do you plan to see A Dog’s Way Home? Let us know what you think.