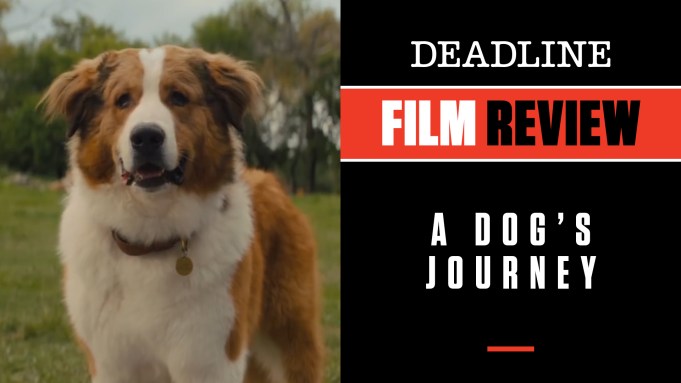 When it comes to dog stories, author W. Bruce Cameron is prolific in writing them and then getting them made into movies. Universal released his A Dog’s Purpose in 2017, and now has followed it up with a sequel, A Dog’s Journey. The latter is not to be confused with Columbia’s Cameron opus A Dog’s Way Home, which was a separate tale that came out earlier this year, but you would be excused if you think you were experiencing deja vu. You aren’t.

Of the trio the latest is the greatest, especially for dog lovers who want to believe our mutt is looking out for us like a guardian angel. Emmy-winning TV sitcom director Gail Mancuso has taken over the directing leash from Dog’s Purpose helmer Lasse (not Lassie) Hallstrom, who once made a movie called My Life As a Dog which wasn’t about dogs at all, but I digress.

The script for A Dog’s Journey by Cameron, Maya Forbes, Cathryn Michon and Wallace Wolodarsky alters the format just a bit from the original, but not the idea of one dog being continually reincarnated to fulfill its purpose, as it were. In the first film it was via a number of different characters, but this time around it is more narrow, as Bailey, the titular star of Purpose, makes a promise to his beloved Ethan (Dennis Quaid) that he will always look after young granddaughter CJ, who has bonded with the pooch but is now being taken away from Ethan and his wife Hannah’s Michigan farm by their troubled daughter Gloria (Betty Gilpin). Gloria is still grieving the loss of her husband and CJ’s dad but has numerous issues including with alcohol.

It’s during a highly emotional scene as the aged Bailey is being put to sleep that the promise is made — as we are only too aware throughout this movie, as in Purpose, with Josh Gad’s voice-over performance as Bailey and all his alter-egos (which this time include a beagle/spaniel mix named Molly rescued by the 11-year-old CJ (Abby Ryder Forston); Big Dog, who has a brief chance encounter with CJ; and  a Yorkshire Terrier named Max, who stumbles into the life of an older CJ (now played by Kathryn Prescott).

Along the way there are plenty of funny adventures with the various incarnations of Bailey, all determined to make sure CJ lives a good and happy life despite her propensity for hooking up with the wrong kind of boyfriend — particularly in a subplot involving a creepy guy named Shane (Jack Manley) that goes very bad. I could have done without that part, but it is obviously thrown in to add drama. There is also her good childhood friend Trent (Ian Chen and Henry Lau at different ages); clearly he is the guy the dog needs to keep in the picture, and does so especially when a cancer diagnosis becomes part of the plot.

Mancuso does a lovely job of making the transitions and brief dog death scenes less painful and numerous than they were in A Dog’s Purpose, and she has found the perfect cornfield as a connective tissue. And speaking of tissue, you made need a few. — Mark Isham’s lush score makes sure of that. As for the actors, it is nice to see Quaid back, even with heavy aging makeup. Marg Helgenberger, with little to do, replaces the late Peggy Lipton. Prescott and Lau are particularly impressive, and Gilpin brings a certain complexity to Gloria that makes a largely unsympathetic character feel very real.

I am a sucker for a boy-and-his-dog movies of every stripe, but this one flips the usual gender and makes a girl and her dog just as effective. I have to say it really hit the spot for me. Anyone who ever loved a dog and had to say goodbye will likely agree this movie is therapeutic.

Check out my video review that includes scenes from the film in the video above. Gavin Palone is the producer and Universal releases the film Friday. I say go.

Do you plan to see A Dog’s Journey? Let us know what you think.