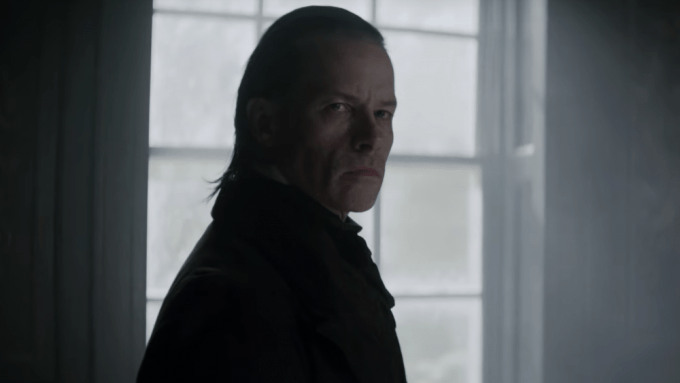 From the looks of the trailer for FX’s forthcoming adaptation of Charles Dickens’ A Christmas Carol, this isn’t going to be your run-of-the-mill “bah humbug!” tale of Scrooge with a polished, happily-ever-after ending. Steven Knight brings the dark and grimy sensibilities from Taboo and Peaky Blinders to retell the classic tale with Guy Pearce stepping into the role of the toxic one-percenter Ebenezer Scrooge. A Christmas Carol is set to premiere on December 19 at 7:30 pm ET/PT and will replay on December 22 at 7:30pm ET/PT with an encore immediately following. It will also air on December 24 at 8 pm ET/PT and December 25 at 4 pm ET/PT — just in time to celebrate the holidays.

Written by Knight and directed by Nick Murphy leans into the ghost story of A Christmas Carol and is sure to give us a “spine-tingling immersion into Scrooge’s dark night of the soul.” As seen in the trailer, it is very different than the tidings and joy we get from typical Christmas Carol adaptation. In addition to Pearce, the cast also includes Andy Serkis, Stephen Graham, Joe Alwyn and Vinette Robinson.

Read the character descriptions below and watch the trailer above.

Guy Pearce as “Ebenezer Scrooge”
On Christmas Eve we meet Scrooge. A skinflint, isolated, begrudging, resentful of the world. He is aloof and miserable, always testing humanity to find the worst in people and to ratify his own confirmation bias. All the friendships that he had in the world he has lost, and the hopes/optimism he had as a child have been shattered by a brutal upbringing. Can the advent of his business partner Marley and three ghosts reinvigorate the spirit/joys/hopes of a once-lost boy?

Andy Serkis as “Ghost of Christmas Past”
The Spirit of Christmas Past is jaded. He’s been sent to make lost souls repent before, why should Scrooge be any different to the last? He prods and pokes where it hurts, transforming himself into those known to his charge, finding place of pain, shame, and self-knowledge. But can he get Scrooge to recognise himself, and repent?

Stephen Graham as “Jacob Marley”
Jacob Marley sits in his coffin and regrets. He regrets his miserliness, the risks he took, the penny-pinching that resulted in his factories being run down, his workforce pushed to the brink, ensuring accidents and calamities, lives lost, communities crushed. His guilt haunts him. He wishes to repent. He is sent on a journey of the soul – but to guarantee the safety of his – he must also save Scrooge’s.

Charlotte Riley as “Lottie/ Ghost of Christmas Present”
Lottie was Scrooge’s elder sister. Was, because she is dead. Or was dead, because now she has sent herself back to the world of the living to try her turn at saving Scrooge’s hardened soul. With fire and love and anger in her heart she will force Scrooge to see difficult truths.

Joe Alwyn as “Bob Cratchit”
Bob Cratchit works constantly for Scrooge on little pay and even less recognition. His loyalty is not rewarded, and yet he persists at Scrooge’s, wryly returning banter with his boss and letting things lie, until the stakes get much, much higher. And he won’t take any more.

Vinette Robinson as “Mary Cratchit”
Mary Cratchit is a resilient and hardworking woman, diligent, thoughtful, careful. Vengeful. She loves her husband and her children and would do anything for them. Anything.

Jason Flemyng as “Ghost of Christmas Future”
A menacing figure, the Spirit of Christmas Future is tall, hooded and silent. His mouth is stitched tightly together. He cannot change the future, he can only show what may come to pass. The night is dark and foreboding and he holds the key to Scrooge’s nightmares.

Kayvan Novak as “Ali Baba”
The physical embodiment of Scrooge’s childhood dreams, Ali Baba emerges as one of Scrooge’s oldest friends and comforting escape from the pages of his earliest favorite book, One Thousand and One Nights. He has been with Scrooge through dark times and will show them to him again.

Tiarna Williams as “Belinda Cratchit”
Belinda Cratchit is feisty and loving. She’s always ready with a quip and retort and is active and fast of foot when needs be.

Lenny Rush as “Tim Cratchit”
The well-loved youngest of the Cratchit children, Tim Cratchit’s dreams are bigger than the stars, and he’s encouraged by his family to seek them out. Undaunted by the world, Tim is determined to try everything, even when it puts everything at risk.

Johnny Harris as “Franklin Scrooge”
Scrooge has been estranged from his father since he was a child, but his domineering and brutal presence still haunts him. Tyrannical, single-minded and cruel, Franklin spent more care tending his failing businesses than his children, except to remind them of their reliance on him. His determination that Scrooge realize the cold heartlessness of the world has been a lesson Scrooge never let go of.

Knight’s take on A Christmas Carol is the first in a series of adaptations of Dickens’ novels, commissioned by Piers Wenger, Controller of BBC Drama, and Charlotte Moore, Director of BBC Content, that will air in the next few years. A Christmas Carol is also the latest collaboration between the two broadcasters, who were also responsible for the acclaimed FX drama series Taboo.