After Contract Renewal, Disney CEO Bob Chapek Looks To Prove Wishes Can Come True With Him Helming The Ship
Read the full story
July 22, 2019 6:53am 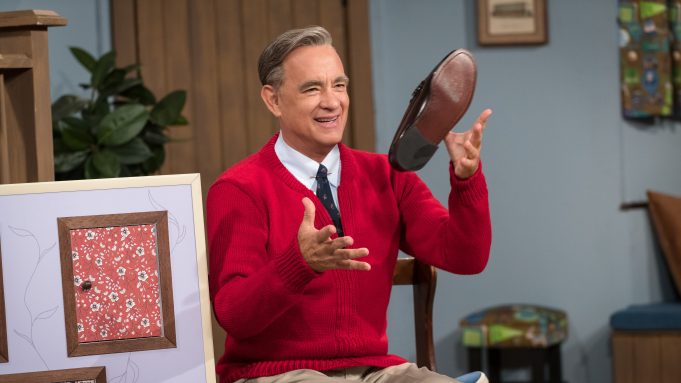 The rightness of the Tom Hanks-as-Mister-Rogers casting seemed a no-brainer from the start, and the first trailer for Sony’s A Beautiful Day in the Neighborhood, released today, seems at the very least to confirm those initial reactions.

“Hello, neighbor,” are, appropriately enough, the first words spoken in the first official trailer for the film (watch it above), as we also see Hanks’ Fred Rogers playfully tossing his shoe in the air as he re-enacts Rogers’ familiar shoes-to-slippers opening of PBS’ Mister Rogers’ Neighborhood.

Directed by Marielle Heller from a screenplay by Micah Fitzerman-Blue & Noah Harpster, inspired by the Tom Junod article “Can You Say. . . Hero?”, Beautiful Day chronicles the real-life friendship between Rogers and Junod that began when magazine writer Junod – played in the film by Matthew Rhys – is assigned to write a profile of the beloved kids TV personality.

As described by Sony, Beautiful Day is “a timely story of kindness triumphing over cynicism,” as the jaded Junod “overcomes his skepticism, learning about empathy, kindness, and decency from America’s most beloved neighbor.”

The trailer is filled with images that will be recognizable to at least several generations of TV viewers, including, of course, such puppets as King Friday and Daniel Striped Tiger. The trailer builds to an emotional subway scene in which a train full of New Yorkers breaks into the familiar theme song that gives this movie its title.

The upcoming movie is the second major recent film about the iconic Mister Rogers, following last year’s critically praised – and remarkably Oscar-snubbed – Morgan Neville-directed documentary Won’t You Be My Neighbor.

Sony releases A Beautiful Day in the Neighborhood on Nov. 22.