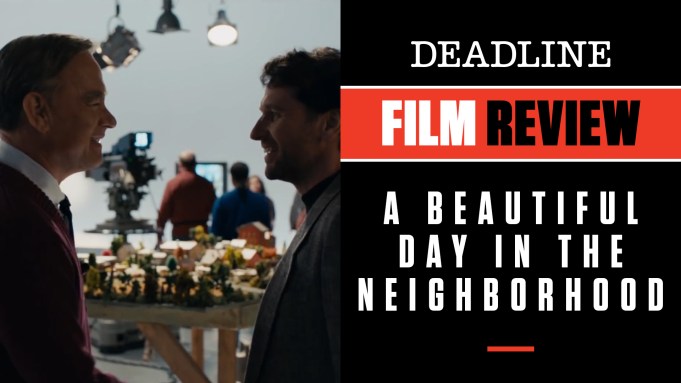 Right after its world premiere at the Toronto International Film Festival in September, I wrote that A Beautiful Day in the Neighborhood was the movie we need right now. As every week passes, it becomes even more clear this is a movie with a message of kindness and understanding that could and should resonate in such divided times. Tom Hanks obviously is perfect casting as PBS children’s TV legend Fred Rogers, but it really is a supporting role in a way since the main thrust of the film is about a journalist who comes to interview Mister Rogers and finds his own life changed for the better in the process.

Opening with Rogers hosting his famous show, it becomes clear that this is no ordinary episode as he politely tells the story of Lloyd Vogel (Matthew Rhys), a man desperately in need of help. That man is a journalist for Esquire magazine who has been assigned to interview Rogers for an article. This hardened writer is not thrilled about it because he thinks it is a fluff piece, but soon he finds the tables are turned and it is Fred Rogers who is taking charge in his own quiet, unique way. Like he does for so many young children, Rogers offers life advice that goes right to the heart of Lloyd’s downward spiral.

With a new baby in his family, conflicts with his wife Andrea (Susan Kelechi Watson) and a broken relationship with his ill dad (Chris Cooper), Lloyd seemingly has lost his way, and it will take Fred Rogers — compassionate and understanding and wise — to help put him back on the right path.

Last year Morgan Neville delivered a brilliant and heartwarming documentary about the life of Fred Rogers, Won’t You Be My Neighbor? If anyone had any doubt about the genuineness of this man, it was put to rest after that movie. Now this narrative film — beautifully directed by Marielle Heller who always brings a humanistic touch to her films, and written by Micah Fitzerman-Blue and Noah Harpster, who clearly have a keen understand of how Rogers ticked — take a different approach by zeroing on the story of Lloyd and his reawakening at the hands of an empathetic television star. This all is inspired by a true story, even if the names (other than Rogers) have been changed. It is based on Tom Junod’s 1998 Esquire cover story and how that reluctant gig made such a huge impact on his own life, becoming the beginning of a beautiful friendship. Many of the details in Lloyd’s life don’t match Junod’s, but the spirit is all there.

Matthew Rhys is excellent in the role, as is Kelechi Watson as his wife. Cooper is very moving as Lloyd’s father, and the two have an incredibly moving scene that will bring you to tears. But it is Hanks who really takes the acting honors here, faithful to the sheer human dignity of the icon he is playing and never striking a false note. It isn’t an impression or a caricature, but Hanks nicely captures the essence of a very special human being.

Production values in re-creating the milieu of Fred Rogers, including use of his Pittsburgh TV studios, is first rate. This is the kind of movie we don’t get much from major studios anymore, a simple and rewarding story that just might put out a little much-needed understanding and kindness back into a world desperately in need of it. Sony opens the TriStar release on Friday. Producers are Youree Henley, Leah Holzer, Peter Saraf and Marc Turtletaub. Check out my video review of the movie at the link above with scenes from the film.

Do you plan to see A Beautiful Day in the Neighborhood?  Let us know what you think.