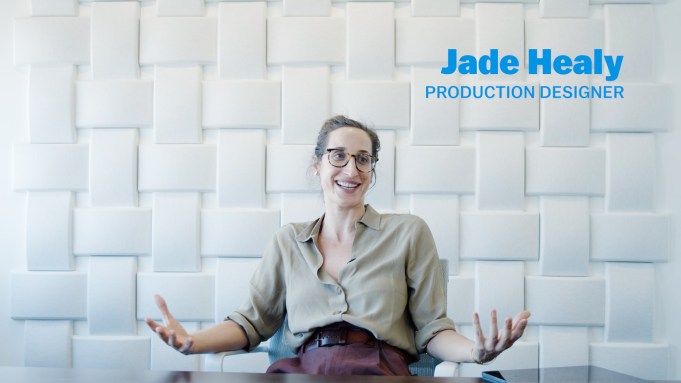 On Marielle Heller’s A Beautiful Day in the Neighborhood, production designer Jade Healy was tasked with recreating the iconic set of Mister Rogers’ Neighborhood, engaging in a complicated process of detective work to get each small detail of it right.

“Even though it seems really easy to think, ‘Oh, we’re just going to recreate it,’ there’s a lot of care to get it right, and there are no plans for that. They didn’t have plans that they preserved, so we just had to kind of look, guestimate, try to get it right,” Healy explains, in the latest installment of Deadline’s Production Value video series. “It was working backwards with the design, where you have something, and then you’re trying to figure out how they built it.”

Based on a 1998 Esquire article by Tom Junod, the Sony Pictures drama examines the unlikely friendship that a journalist finds with interview subject Fred Rogers—a children’s television show host beloved for his empathy and decency, which at first was hard for the cynical writer to trust.

Recreating Rogers’ set, with all its puppets and intricate miniatures, at Pittsburgh’s WQED—on the very stage where the original show was filmed—Healy found one of the most challenging parts of the job to be the accurate reproduction of colors found within the set. “[Preserving] the look of the show… was an interesting feat. Because you look at the show, and there’s so many images of it. But because it’s shot on the Ikegami, and then the stills of it are shot on film, and then we’re looking at it years later, the colors of everything are so different,” the production designer notes. “We spent our time arguing whether it was blue, the walls of the house. Or was it gray?”

During production on A Beautiful Day, a number of people who knew the late Fred Rogers intimately stopped by the studio for a glimpse at the recreated set, which generally proved to be an emotionally overpowering experience. “We had his producer visit, and Joanne [Rogers], and his stage manager…They came, and they were like, ‘This is bringing me back,’ and it was almost like we’d resurrected Fred for a few days,” Healy says. “They could come and revisit this part of their life that was really important for a lot of these people. It was one of probably the best days of my life, as a production designer, getting to see that.”

Designing a second 2020 awards contender in Noah Baumbach’s Marriage Story, Healy is only a decade into her career as a production designer, and has already cultivated a singularly impressive resume. Collaborating with acclaimed writer/director David Lowery on three features—A Ghost Story, Pete’s Dragon, and Ain’t Them Bodies Saints—the designer has also worked with the likes of Ti West (In a Valley of Violence), Craig Gillespie (I, Tonya) and Yorgos Lanthimos (The Killing of a Sacred Deer).

From Healy’s perspective, excelling as a production designer has been a matter of coming to projects with a clear, communicable and compelling vision each time around. “I was able to read a script and really see what the movie looks like, and then I was able to put together a look book that just translated it, so then when I showed it to the director in our first meeting, before I even had a job, they could look at it and go, ‘Whoa, that’s it.’ I’ll spend like 40 hours on a look book before I even have a job, dissecting the story, figuring out who the characters are,” Healy says. “I think of myself as like a detective, [an] anthropologist. I’m really digging deep, trying to figure out the backstory that’s not there, and I always bring that to my work.”

For more from our conversation with the production designer, click on the video above.