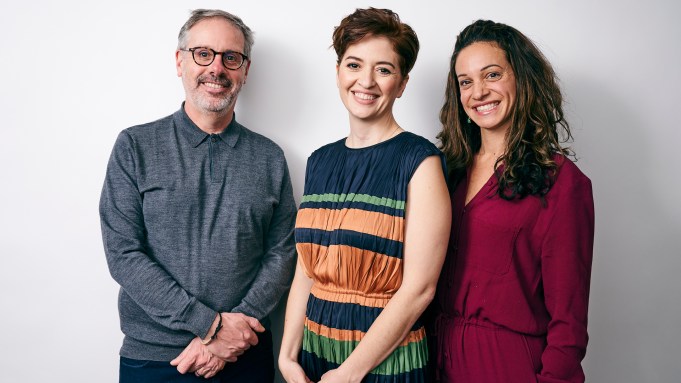 She explained recently at Deadline’s annual The Contenders New York how the casting coup came about.

“I know Tom’s son Colin [Hanks] — we’re friends. And our kids were all playing at a backyard birthday party and I’m sitting there talking to Tom Hanks…and he was asking me, ‘So what do you do?’ And I said, ‘Well, I’m a director…I made this movie Diary of a Teenage Girl,’ and he was like, ‘I should watch it.’”

Heller considered that comment mere idle Hollywood chatter, but soon discovered otherwise. “Because he’s Tom Hanks and he’s genuinely the most genuine person in Hollywood who does what he says,” Heller recalled, “five days later I got a personal email from him saying, ‘I watched your movie and I loved it. And can we have a meeting.’”

After meeting, they pledged to work together and with A Beautiful Day…the opportunity materialized. Producers Leah Holzer and Peter Saraf — who joined Heller on the Sony panel at the DGA Theater, which was packed with Academy and guild voters — said they had pursued Hanks for the role of the children’s television pioneer unsuccessfully — until Heller became attached to the project.

“Hanks was your dream casting,” Deadline’s Pete Hammond, the moderator, commented to Holzer.

“Always — he was almost the only casting. He passed a number of times,” Holzer noted. “And then Mari got involved…and she brought him this, I think, while he was in Greece and he read it right away. And a week after we met with Mari about going to Tom Hanks she called us and said, ‘He wants to do it.’ ”

Perhaps surprisingly, Heller calls Fred Rogers the “antagonist” in the film that revolves around a journalist (Matthew Rhys) assigned to write a profile of the creator of Mister Rogers’ Neighborhood. It could be challenging to encounter Rogers in real life, Heller asserted, precisely because of how emotionally present he was.

“The truth is Mr. Rogers in his lifetime had this ability to elicit really major change out of the people he came into contact with,” the director said. “He…asked for a level of intimacy and a truth that most people don’t require.”