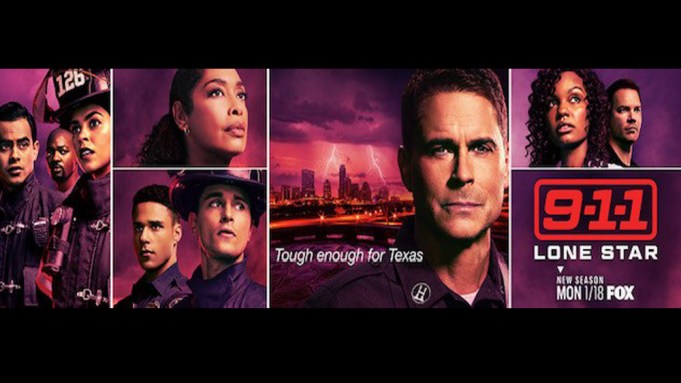 Nothing messes with a good beer pong-‘n’-pool party like a volcanic eruption. In fact, “This can become a mass-casualty event.”

Here is the first teaser for Season 2 of Fox’s spinoff drama 9-1-1: Lone Star. In keeping with the franchise’s past season openers, a major disaster is hitting town — and it’s up to the first responders to keep their heads and save our souls. The Los Angeles-set mothership 9-1-1 has launched previous seasons with an earthquake, a tsunami and a dam break, and now the Austin-set Lone Star team must deal with … let’s call it Pompeii and circumstance.

Season 2 sees the arrival of Gina Torres in the series-regular role of Paramedic Capt. Tommy Vega, following Liv Tyler’s exit after the first season. “Welcome to the 126,” Capt. Owen Strand (Rob Lowe) tells Vega in the teaser. “I think we’re gonna have some fun together.” She replies, “Oh, you bet we are.”

Have a look at the teaser above — and don’t bother with an umbrella.