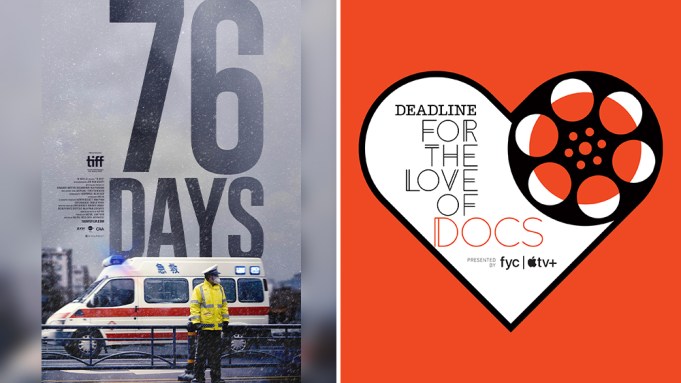 In the MTV Documentary Films feature 76 Days, director Hao Wu (People’s Republic of Desire, All in My Family) chronicles the beginning of the coronavirus pandemic in Wuhan, China. The feature docu immerses the audience in the panic and fear of the emerging COVID-19 outbreak on January 23, 2020 in the city of 11 million.

Production of the film started in February 2020 soon after the lockdown. Set deep inside the frontlines of the crisis in four hospitals puts the viewer in the center of the pandemic as we see medical staff frantically treat the flood of cases coming in. The raw and intimate stories bear witness to the death and rebirth of a city under a 76-day lockdown, and to the human resilience that persists in times of profound tragedy.

Wu said he tends to lean towards character-driven documentary films so 76 Days was a departure for him. He said he tends to shy away from “newsy topics” because he feels he doesn’t know what more he can bring to the table to a story that has been heavily covered by the news. With COVID-19, however, he said it was very personal.

Wu and his spouse and kids were set to fly to Shanghai to celebrate Chinese New Year with his parents on January 23. Six hours before the flight they canceled the tickets because Wuhan was put into lockdown. He ended up flying there by himself to spend time with his parents, who recently had cancer surgeries. “At that time, no one knew how bad the situation was in Wuhan,” Wu pointed out. When he arrived in Shanghai, the virus had spread around China, and he saw the entire city was shut down.

When he came back stateside, he was approached to make a documentary about COVID-19 and jumped at the opportunity. “It’s become personal to me,” he said. “I experienced the fear, anger and confusion — I wanted to use this film to figure out what happened.”

Wu said “shooting that film was like filming in a warzone,” and he and his co-directors are shown essentially running around frantically; you barely see faces because of face coverings and PPE. For Wu, it felt like an ensemble film much like a war film.

“Our intention was to use those characters as a stand-in for all medical workers and all of the patients going through this difficult phase in their lives,” he added.

And like any war, Wu said that almost everybody involved in the film has some sort of post-traumatic stress as a result. “They are still trying to recover — like Weixi Chen, my co-director. He doesn’t want to do a COVID film ever again,” he said.

76 Days debuted at the Toronto Film Festival in January before hitting the festival circuit. The pic recently won the Audience Award for Documentary Feature at AFI Fest.