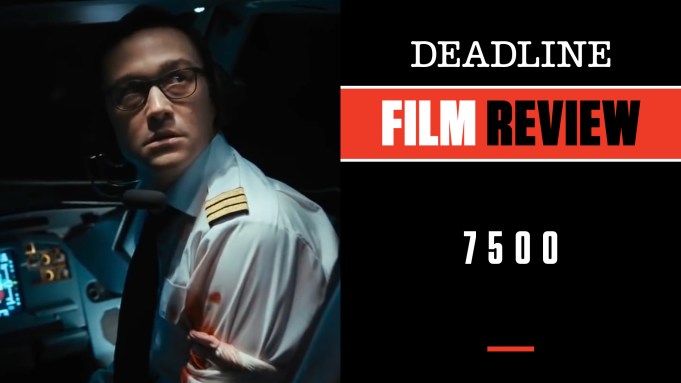 We have seen all manner of frightening movies set in the air, from the ridiculous (Airport ’75 and its earlier cinematic inspiration Zero Hour) to the sublime (United 93, the fact-based post 9/11 film that won Paul Greengrass a directing Oscar nomination). Writer-director Patrick Vollrath’s feature film debut 7500 belongs in the plus column, though it does feature some of the tropes we have seen before in the genre. But it is such a white-knuckle, truly edge-of-your-seat experience you can forgive a little contrivance here and there.

Clearly it owes a lot to Greengrass and the economy he brought to United 93. Both films are tightly constructed, sparse, precise and riveting, perhaps no coincidence since Vollrath actually lists Greengrass among his personal thank-yous are the tail end of the final credits. This film is unique among others in that it almost never leaves the cockpit. Everything in this hijacking story is told from within its confines, and as a sheer work of bravura filmmaking and craft, 7500 proves to be a remarkable feature debut, even knowing that Vollrath was Oscar nominated for his 2015 Live Action Short, Everything Is Going to Be Okay. The guy has talent, no question, and this is the second Amazon Studios film I have seen in three weeks to really announce a major new directorial talent (Andrew Patterson’s The Vast of Night being the other). The streamer knows how to find ’em, for sure.

Joseph Gordon-Levitt, in one of his most accomplished performances, plays co-pilot Tobias Ellis, whom we meet as he and the Captain, Michael (Carlo Kitzlinger), go about prepping to take off for their routine Berlin-to-Paris journey. These scenes are particularly engaging as the focus is all on the details of an ordinary flight, one you can tell these two colleagues have been through often. Michael is German and Tobias American, but not much is made of any of that or, seemingly, when we learn the flight attendant who pops in to talk to Tobias is also, as it turns out, his girlfriend Gokce (Aylin Tezel) and mother of his 2-year-old son. You don’t have to be a genius to suspect that their relationship mgith play a part as the main event takes place and hijackers storm into the cockpit with makeshift knives made from cut glass. They attack the pilots, seriously wounding the captain and bloodying Tobias before he can force the door shut on them, leaving them outside, where we hear the constant drumbeat of banging as they attempt to get back in. That sound design decision provides an extra level of developing tension and a haunting refrain.

With the captain sidelined and getting worse, Tobias goes into action, contacting the tower and looking for a safe haven to do an emergency landing. His only method of knowing what is going on is watching the TV monitor showing the hijackers as they become increasingly agitated. When they take a passenger hostage and hold him up threatening to cut his throat, Tobias knows the situation is escalating and the serious question of life and death starts taking hold. It only gets more intense and emotional from there, forcing a direct confrontation that makes up the film’s last third and a cat-and-mouse standoff between Tobias and the younger hijacker Vedat (an excellent Omid Memar), an 18-year-old kid in way over his head and on the verge of hysteria. The leader of the plot, his friend Kenen (Muruthan Muslu), is a fanatic and truly dedicated to doing anything he can to get what he wants.

The movie hangs on Gordon-Levitt’s emotional, intense portrayal of a man who is many things at once — a calming professional and a distraught human being caught up in an untenable situation for which there is no easy out. He’s superb, as is Memar, who helps make their confrontation really pop. Vollrath has directed this movie with no room for fat. It might not be a true story like United 93, but it sure as hell feels like one in the best sense of the word. It is authentic to its core.

Producers are Jonas Katzenstein and Maximilian Leo. Kudos to cinematographer Sebastian Thaler for the thrilling and challenging camerawork. Amazon begins streaming on Thursday. Check out my video review with scenes from the film at the link above.