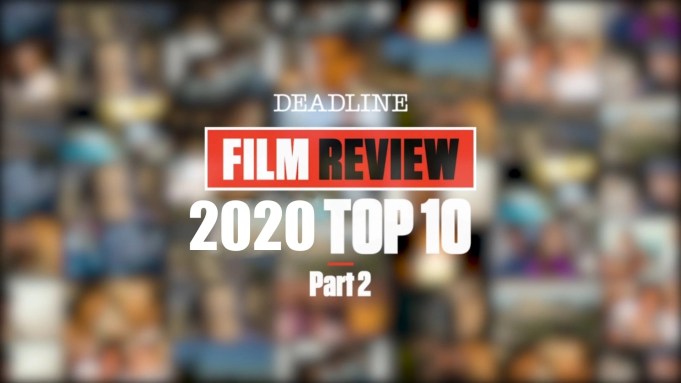 And then there were five.

It is time on this eve of a new year (thank God) to reveal the rest of my 10 Best Movies of 2020 list with No. 5 on up, including my choice for this most unusual year’s top film — though as always it’s an arbitrary choice, when you get down to it, like picking apples or oranges.

On Tuesday I posted Part 1 of my annual 10 Best list, even if I cheated as usual and made it actually eleven. So here’s a recap: In ascending order those films I revealed were: 10) a tie between The Prom and On the Rocks, two films that represented a New York City we can only fondly remember in this year of the pandemic. Ryan Murphy’s was a tribute to old-fashioned Broadway musical power but with a pertinent message of inclusion for today, while Sofia Coppola’s smart and sophisticated comedy also was a valentine to NYC at its most sparkling, including a scene between Bill Murray and Rashida Jones at the 21 Club, a symbol of the Big Apple as it was but since has closed, maybe forever, due to the pandemic; 9) The Life Ahead, director Edoardo Ponti’s gift to his legendary mother Sophia Loren who, at 86, has returned in a leading role worthy of her greatest; 8) Borat Subsequent Moviefilm, with Sacha Baron Cohen proving to be a Peter Sellers for a new age, bringing his most outrageous alter-ego back with the intention of influencing nothing less than perhaps the most urgent presidential election of our lifetimes, and doing it with devastatingly targeted humor; 7) Tenet, with which Christopher Nolan reminded us of the power and glory of moviemaking designed for the biggest theater screen there is; and 6) Mank, David Fincher’s movie-movie in beautiful black and white took us back to Hollywood’s Golden Era and allowed us still to argue about Citizen Kane, perhaps the most influential film ever made.

As I said on Tuesday, my criteria here is only for films that had a proper release in Los Angeles — whether limited or regular — steaming VOD or drive-ins during the 2020 calendar year. Normally that would include all of a year’s awards contenders, but the Academy led the way for most significant awards-giving groups (Golden Globes, SAG, BAFTA, Critics Choice, the guilds) to extend eligibility into the first two months of 2021. And although I have seen at least 20-25 of those upcoming January and February releases, either at fests or embargoed early looks, I am not including them on this list, which again is devoted strictly to 2020 and movies the public has had some sort of chance to see, whether in wide release (such as it is) or even limited qualifying engagements before a larger 2021 expansion.

The 21 Most Influential Films Of The 21st Century, So Far

My choices for Nos. 5 to 1 include (in no particular order as written here), a heartrending story of family and the immigrant experience in America, a reminder of the dream this country was built on but which now is being used as a political football; a period Western from a master filmmaker and a beloved movie star that manages to mirror to a similarly divided America of today; a truly intimate human story of survival told on an impressive epic scale of moviemaking from a quadruple-threat filmmaker with a warning for the planet; a raucous, politically charged true account of a tumultuous time in American politics blending social upheaval and disruption while packing an emotional wallop from a superb ensemble cast and brilliant writer-director; and a riveting film debut from an actor adding writer-director to her filmography with a black comedy/suspense thriller toplined by one of 2020’s truly great performances.

To find out where these all landed, just click on the link at the top of this post. Happy New Year, everyone, and let’s hope 2021 brings back movie theaters in full force once again. We can only dream.