UK PM Boris Johnson To Step Down Amid Resignations & Scandals: Timetable For Successor, Analysis Of What It Means For British TV & More
Read the full story
October 3, 2019 2:28pm 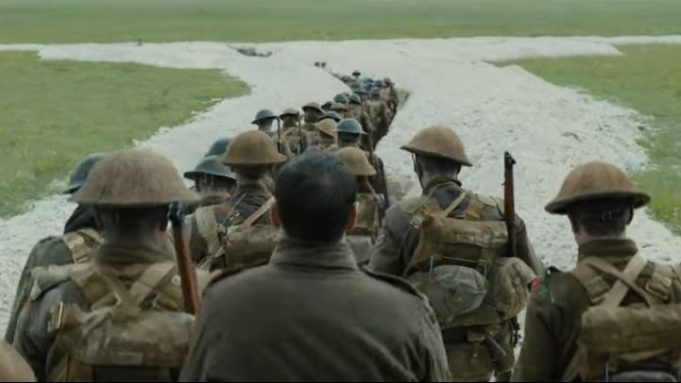 UPDATED with more details from panel: Calling it “the most exciting job of my career,” director Sam Mendes on Thursday introduced the trailer for his upcoming World War I epic 1917, and captivated a New York Comic Con crowd with tales of how and why he decided to make the film in one unbroken shot.

Universal Pictures is set to launch the awards-season pic in theaters in limited release December 25 before going wide January 10.

With the movie telling the real-time, two-hour-long tale of two soldiers (Dean-Charles Chapman and George MacKay) on a mission to stop a massacre of British troops by German fighters, Mendes said he hoped to get audiences to “breathe every breath” with the soldiers.

The effect of the unbroken shot, added Mendes, was, “A dream state emerges after awhile, and you know you can’t escape” the incredibly tense experience.

The same went for the camera, lighting and sound crew that shot the film “at locations throughout the UK, and then stitched it together” to keep the real-time effect, added producer Pippa Harris.

Mendes said the story came from a fragment of an idea his grandfather told him when he was 10. While admitting his grandfather’s war experience wasn’t the basis, “he told me a story about carrying a message, and that idea stayed with me” through the years.

The unbroken shot conceit meant the filmmakers were beholden always to the elements; if one shot was completed under cloud cover and the sun suddenly emerged, cast and crew immediately switched into waiting and rehearsal mode, watching the skies for more clouds and another chance to quickly go back to filming.

It was, said co-screenwriter Krysty Wilson-Cairns, “an army of people trying to do the
impossible everyday. It was constantly bat-sh*t crazy.”

It was also historically accurate, covering a day in spring 1917 when, with German troops having reportedly retreated back to the Hindenburg Line, 1,600 British fighters were set to march in, not knowing it was actually all meant to be a heavily fortified trap, with landmines rigged and snipers waiting. Watching the film, “you end up so involved with these two characters” trying to warn their fellow fighters, added Wilson-Cairns.

No one felt the pressure more than the film’s young stars Chapman and MacKay, since the action is seen through their perspective for all two hours. “The physical relentlessness of it was actually a pleasure,” said MacKay, who, in one of the most extraordinary moments in the film, is seen racing through a soldier-filled field, barely outrunning enemy explosions. (Said Mendes of the co-stars, “I told them both, ‘You’ll never be this fit again.’”)

And when asked by moderator Erik Davis of Fandango about research for the role, Chapman mentioned reading the published diaries of World War I soldiers, only to discover an entry from his great-grandfather among them—an admission that shocked Mendes and the rest of the panel. “He was part of the [British] cavalry, and he was shot and wounded,” Chapman said. “He survived in ‘no man’s land’ [the dangerous area between trench lines] for four days. His tale really inspired me.”

The incredible link between the grueling story and the seemingly impossible shooting was lost on no one, with the onus perhaps most on Deakins, who in 2018 won his first Oscar—for Blade Runner 2049—on his 14th try. “There were times when we were almost at the end of a shot and [something happened] and you have to start again,” he recalled.

And yet, it all worked. “I saw a cut about a week after shooting, and I wasn’t aware that I
was watching one take,” he said.

What does remain, he added, was the story itself. As part of his own research, he looked through countless photos of the period, gaining perspective on what the look and feel needed to be. “One photo was of a group of soldiers,” Deakins said. “And there was one kid looking at the camera and to me his look said everything. He looked so lost and that really hit me.”

Universal and Amblin Partners will distribute the film internationally, with eOne distributing on behalf of Amblin in the UK.