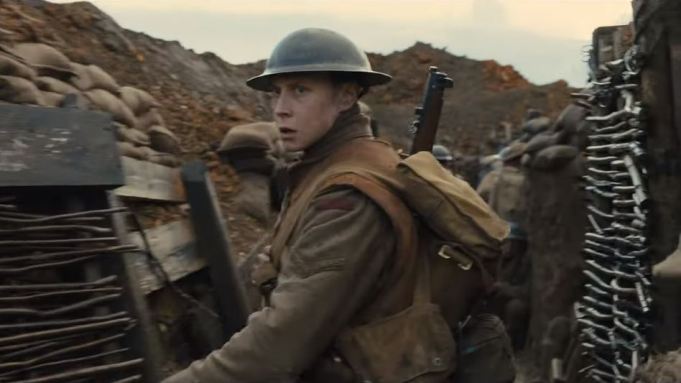 A group of British soldiers is about to walk into a trap, but there’s a chance to save them. “Your orders are to deliver a message calling off tomorrow’s attack,” a young Tommy is told. “If you don’t, we will lose 1,600 men — your brother among them.”

It’s a race against time, and there’s not much of it.

Here is the first trailer for 1917, a drama from Spectre and Skyfall director Sam Mendes about the Great War — one of the deadliest conflicts in human history that was expected to be “the war to end all wars.” Young British fighters Schofield (George MacKay) and Blake (Dean-Charles Chapman) are given the seemingly impossible mission detailed above. And they take their duty seriously amid the horrors of battle, particularly the scourge of trench warfare.

Mendes wrote the screenplay with Krysty Wilson-Cairns. He also produced the film with Pippa Harris via their Neal Street Productions for DreamWorks Pictures in association with New Republic Pictures. Jayne-Ann Tenggren, Callum McDougall and Brian Oliver also are producers.

Universal will release the film on Christmas Day in limited release, followed by a wide rollout on January 10.

Have a look at the stylish trailer above, and tell us what you think. Here is the key art: