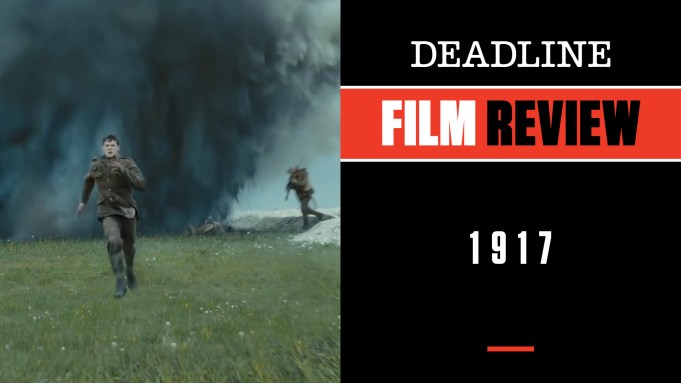 If Sam Mendes’ epic, yet intimate, World War I-set drama existed just for the depth and breadth of its awesome technical achievement, that would be more than enough. But the bottom line is Mendes knows a great movie is in the story, and the astounding 1917 delivers as a powerful meditation on sacrifice and courage in the trenches.

The film, ostensibly shot as one long take — or so it is meant to seem — is a stirring yet simple story of two soldiers crossing into enemy territory to get a message to a unit that is about to fall into a German trap, an act that, if they follow through with plans, surely will end in their deaths. Schofield (George McKay) and Lt. Col Blake (Dean-Charles Chapman) take on the assignment and begin a treacherous journey to get word to those in charge that they must stop their plan before it is too late. Adding a strong dose of human emotional trauma is that one member of the unit happens to be the Blake’s brother, thus bringing a very personal aspect to their quest. We are right there with them as the camera follows their every heart-pounding movement through man-made trenches, abandoned posts, unforgiving rivers of water, dropping bombs and planes crashing nearly into them. It is a hell of an adventure, and a war film like no other. How Mendes pulled this all off is a story unto itself.

Shot to look like one long two-hour take in real time, the cinematography of Roger Deakins is simply beyond amazing. His cameras are right in the center of the action at all times, choreographed with the actors and elements in precise rhythms and movements. Scenes are shot in eight- and nine-minute takes, every step being coordinated exactly with the actors as they run through their paces in a desperate effort to get their message there in time. Deakins and his team have achieved something sort of miraculous with technology and the latest advanced cameras that allow us to see a story like this play out in ways we haven’t quite seen before. Yes we have witnessed the one-continuous-take idea before in such films as Russian Ark and the Best Cinematography Oscar-winning Birdman, but 1917 is far more ambitious as a movie, with epic scope and ever-changing locations and action set pieces. The way Deakins can play with shadows and light is the essence of moviemaking itself and is remarkable to experience.

But every department has delivered for Mendes — from Dennis Gassner’s brilliant production design to the spectacular visual effects to Lee Smith’s almost invisible and immaculate editing, most of which had to be done during production. Thomas Newman, a 14-time Oscar-nominated composer, has delivered one of his best scores with music that perfectly matches the action and emotion at every turn. The supporting cast features some well-known actors including Colin Firth, Benedict Cumberbatch, Mark Strong and Richard Madden, but all are in for just one scene or so as the movie totally belongs to McKay, who is riveting to watch, and Chapman, who has some heartbreaking moments that he plays to perfection. Mendes, the Oscar-winning American Beauty director whose films also include James Bond thrillers Spectre and Skyfall, is a first-time screenwriter here with Krysty Wilson-Cairns on a script that dedicated to his grandfather, who used to tell him tales of the Great War. The humanity they have layered into their story is every bit as impressive as the visuals he has managed to get onscreen.

Producers of the DreamWorks production are Pippa Harris, Callum McDougall, Brian Oliver, Jayne Ann-Tenggren and Mendes. Universal opens it in limited release Christmas Day, with a wide break on January 10. Check out my video review with scenes from the film by clicking the link above.