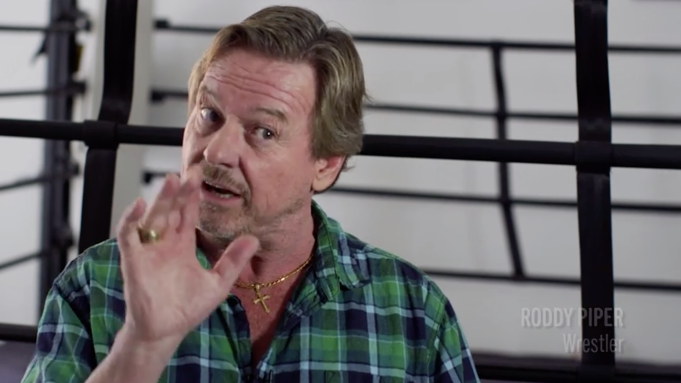 The film is a raw, often surprising perspective on an overlooked Downtown L.A. landmark, often called the Madison Garden of the West Coast. The concrete bunker-like structure was used for the 1932 Olympics. After that, it saw everything from a golden age of boxing, to wrestling, to roller derby, to punk shows, music videos and movie shoots for classics such as Raging Bull and Million Dollar Baby.

“It was a palace of violence,” DeBro tells Deadline. “People were fighting for a piece of the dream.”

In its early years, the Olympic was a glamorous boxing venue frequented by Hollywood heavyweights like Rudolph Valentino and George Raft. Among the champions who stepped through the ropes there were Muhammad Ali, Julio Cesar Chavez and Oscar De La Hoya. Wrestlers like Gorgeous George, Andre the Giant and Roddy Piper made names for themselves in the smoky confines of the Olympic.

A riveting Piper gives what may be his last interview ever in the documentary — he died just months later.

In the interview, Piper describes the visceral aura of the building, how wrestlers walked out from the concrete bowels of the structure, emerging from behind and walking though the crowd: “I know what a gladiator in Rome must’ve felt like.”

“You come out, and you’re behind them, which is good,” says Piper. He liked to keep eyes on the fans because he played the villain and the crowd hated him.

In fact Piper says, “the people who sat there they had boxes of popcorn, and they’d stick the knife up in the box of popcorn. It was the first time I got sliced, you know. When I’d go by, they’d go “schft” [makes slicing motion] and they’d be gone…The crowd would close.”

The whole testosterone-filled circus was run by a woman named Aileen Eaton, who at one time was the top boxing promoter in the country.

18th & Grand is a fascinating record of power, gender, race and culture told through the lens of one of L.A.’s greatest landmarks.

ArcLight Cinemas, in partnership with Slamdance, is hosting the world premiere screening of 18th & Grand: The Olympic Auditorium Story at the Vineland Drive-In tomorrow, February 25 at 7:30 PM. Tickets are sold out.